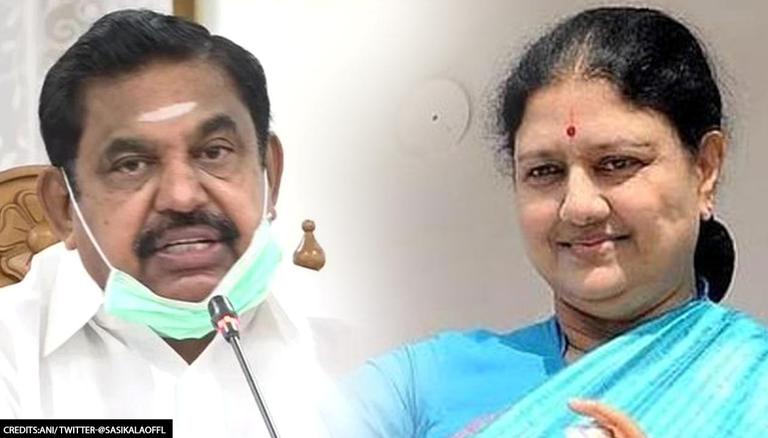 
On Friday, AIADMK co-coordinator and ex-Tamil Nadu Chief Minister E Palaniswami broke his silence on VK Sasikala's prospective re-entry into politics. Two audio clips of the expelled AIADMK general secretary went viral on May 30 where she promised party workers of taking a political plunge again. Speaking to an alleged AIADMK member in another audio clip, Sasikala is heard expressing her pain at the intra-party fights and that she will come back to politics soon.

This was seen as a reference to the widening of the rift between EPS and OPS after the party suffered a huge defeat at the hands of DMK in the recently concluded Tamil Nadu Assembly polls. Maintaining that she is not a part of AIADMK anymore, the ex-TN CM cast aspersions on whether she had indeed spoken to any party cadre. Moreover, he asserted that this was a ploy to spread confusion within the AIADMK ranks.

Former TN CM E Palaniswami stated, "Sasikala is not a part of AIADMK party. Is there any proof that she spoke to AIADMK cadre?" "It is just to create confusion in the party. I will tell that we are a strong opposition party. Some are trying to create problems and do politics in the party," he added.

On January 27, Sasikala was formally released from prison after serving a 4-year jail term in the Rs.66 crore disproportionate assets case. But, she was discharged from the Victoria Hospital in Bengaluru only on January 31 as she was undergoing treatment for COVID-19. After receiving a raucous welcome on her return to Tamil Nadu, the ousted AIADMK leader declared that she would enter full-fledged politics soon.

READ | 'Will restore AIADMK': Sasikala hints at return to politics in voice call to party cadre

However, in a sudden change of stance on March 3, she decided to step aside from politics to ensure that "all followers of Jayalalithaa stay together" to defeat DMK in the TN Assembly polls. In another interesting turn of events on March 24, the then TN Deputy CM O Panneerselvam made a U-turn by hinting at the possibility of re-inducting her in AIADMK. The AIADMK coordinator told a Tamil news channel that he was ready to reconsider his stance on Sasikala's re-entry provided that she accepted the "internal democracy" in the party.

According to him, this decision would be taken on the grounds of "humanity" as she had been with Jayalalithaa for many decades. Maintaining that he did not suspect the expelled AIADMK general secretary of having a role in Jayalalithaa's death, Panneerselvam claimed that he suggested the formation of an inquiry commission so that she is cleared of all charges. Coming days ahead of the state election, OPS' intervention was perceived as a rebuff to E Palaniswami who refused to approve an alliance with the TTV Dhinakaran-led AMMK.