EPS Says Sasikala Is Not Returning To AIADMK; Claims Her Leaked Audios Are With AMMK Cadre 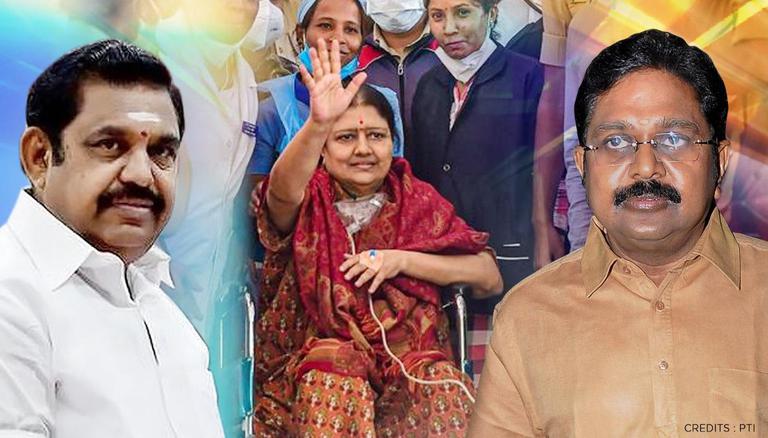 
Former Tamil Nadu CM Edappadi Palaniswami categorically stated that former Jayalalithaa aide Sasikala and her nephew TTV Dhinakaran had no place in AIADMK and ruled out their return to the two-leaves party'. EPS' response came after he chaired a high-level meeting with the AIADMK leaders as a second leaked audio clip of Sasikala allegedly assuring an AIADMK cadre of her return to the party-fold did rounds on Friday. Speaking to reporters after the meeting with AIADMK leaders, EPS stated that Sasikala had no link to the party and that the party's deputy coordinator KP Munuswamy & himself had made it clear.

Pointing out that Sasikala had 'resigned' from politics a month before the Tamil Nadu Assembly elections, AIADMK co-coordinator EPS claimed that the former Jaya aide was speaking to the cadre of TTV Dhinakaran's Amma Makkal Munnetra Kazhagam and not to AIADMK workers in the leaked phone conversation as suggested by reports. EPS further claimed that there were 'deliberate attempts' being made to spread confusion by leaking Sasikala's calls with her loyalists.

EPS says everything okay with OPS

It is pertinent to point out that Sasikala's leaked phone calls with purported AIADMK cadre doing rounds coincides with reports of a rift between EPS and former Deputy CM OPS. On being asked why OPS did not attend the party meeting on Friday, EPS replied claiming that the meeting was not a 'scheduled one'. Further, EPS rubbished reports of a rift between him & OPS and maintained that there were no differences of opinion between the two leaders and that reports of such instances were made for the sake of sensationalism.

READ | 'Will restore AIADMK': Sasikala hints at return to politics in voice call to party cadre

A second audio clip of an alleged conversation between the exiled former Jayalalithaa aide and an AIADMK cadre surfaced on Friday. Amid rumours of a rift between EPS and former Deputy CM OPS, an alleged audio clip of Sasikala's phone call with an AIADMK party worker had emerged a couple of days earlier in which the 'Chinamma' was heard saying that the party's honour would be restored soon. The audio clip surfaced, incidentally, on the same day, EPS had asked for 'proof' of Sasikala's return.

READ | 'Sasikala will not be taken back': AIADMK slams bid to create confusion over return

In the leaked audio clip that surfaced on Friday, Sasikala is heard having a conversation with a man called Anbu (presumably an AIADMK cadre) in which she is heard exuding confidence in the AIADMK cadre backing her. In the alleged leaked conversation between the expelled AIADMK leader and the cadre, Sasikala says that the 'two-leaves party' was a cadre-oriented party and that 'some people' did not understand this - taking an apparent dig at Edappadi Palaniswami who is responsible for ousting Sasikala from the party after Jayalalithaa's death and the former's imprisonment.

"Amma (Jayalalithaa) had said that the party should rule for 100 years. Shouldn't I protect that? Whatever I could do, I did before leaving (to jail)," Sasikala is heard saying in the leaked conversation.

Sasikala goes on to say that all her thoughts are directed towards the well-being of the party, its cadre and doing good for the public. In response to the AIADMK cadre's vow to 'give his life' for Chinamma, Sasikala says that she is very well aware of the backing she has from the AIADMK party workers. Sasikala reassured the AIADMK cadre of her return to politics & said that she would meet the party workers in the near future.