Bhupinder Hooda, a former Haryana chief minister and a member of the Congress, said that the government should buy the stubble so farmers don't burn it. 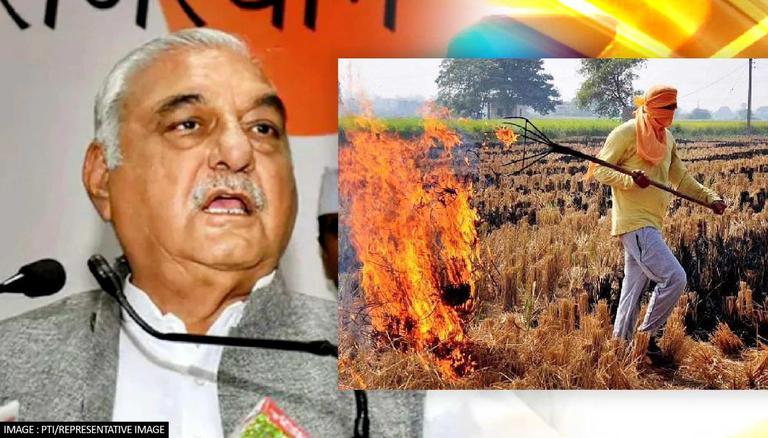 
Former Haryana CM and Congress leader Bhupinder Hooda on Saturday said that the government should buy the stubble from farmers so that they won't be compelled to burn it. Taking to his Twitter handle, Hooda wrote "Farmers are forced to burn it. Government should fix the Minimum Support Price on this, buy it from farmers and use it for other purposes like power generation."

Delhi CM Arvind Kejriwal has often put blame on stubble burning in states like Punjab and Haryana for the city's air pollution. Delhi's Environment Minister Gopal Rai on Friday said to ANI, "The level of pollution in Delhi is still high, till now stubble has been burnt at 45,000 places, the effect of which is read on the pollution level of Delhi".

Farmers are forced to burn it. Government should fix MSP on this, buy it from farmers and use it for other purposes like power generation: Haryana LoP and Congress leader Bhupinder Singh Hooda on stubble burning (13.11) pic.twitter.com/sPJsdpe3I6

Anti-dust campaign is Delhi: Second phase on till December 12

The second phase of the anti-dust campaign commenced on November 12 and will conclude on December 12, informed Delhi Environment Minister Gopal Rai recently. In October, the first phase was completed. He added that during the initial campaign, 2,500 sites were checked, with 450 sites being found to be in violation of the laws, for which a fine of Rs 1 crore 30 lakhs was levied. In the second phase, teams will tour building sites in Delhi once more, and 25 departments have been requested to establish a team as part of the anti-dust campaign, he added. He stated that the pollution level in Delhi is still high, and that stubble has been burned at 45,000 locations, with the effect being read on the pollution level in Delhi.

READ | Stubble burning share in Delhi's air pollution may go up to 38% after Diwali: SAFAR

In the first phase of this year's month-long anti-dust campaign, Rai said, Delhi government-appointed teams of the Delhi Pollution Control Committee (DPCC) and environment marshals walked into fields. As part of his anti-dust campaign, Gopal Rai launched an online portal. He said that this facility will be used to monitor and manage all types of development projects taking place in Delhi. The national capital's air quality remained in the 'Very Poor' category on Saturday, according to the System of Air Quality and Weather Forecasting and Research (SAFAR). According to government sources, an AQI of 0-50 is good, 51-100 is satisfactory, 101-200 is moderate, 201-300 is poor, 301-400 is very poor, and 401-500 is severe/hazardous.