On Friday, senior Congress leader P Chidambaram accused the Centre of using the COVID-19 pandemic in a bid to turn public opinion against the farmers' protest. 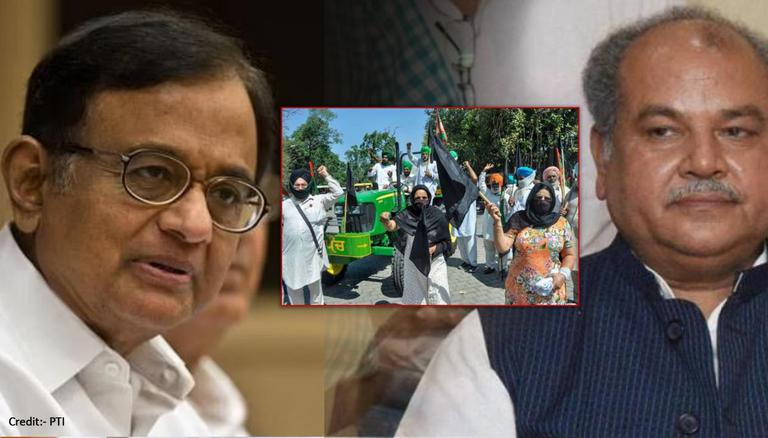 
On Friday, senior Congress leader P Chidambaram accused the Centre of using the COVID-19 pandemic in a bid to turn public opinion against the farmers' protest. Under the Samyukta Kisan Morcha umbrella, several farm organizations are protesting at the Delhi borders seeking the repeal of the three agrarian laws. Responding to the argument that a mass gathering of people during the second wave is not acceptable, he stated, “prolonging the controversial farm laws in the midst of a pandemic is unconscionable”. Slamming the Union government for its "stubborn" attitude, the Rajya Sabha MP called upon the Centre to scrap the farm laws and commence fresh talks with farmers.

It is pertinent to note that the Congress party has extended full support to the Samyukta Kisan Morcha's call for nationwide support on May 26, marking 6 months since the commencement of the farm stir. On Wednesday, farmers gathered in huge numbers, hoisted black flags atop several structures and exhorted others to do the same besides burning the effigies of PM Modi. A day ahead of the protest, Congress leader Navjot Singh Sidhu along with his wife Navjot Kaur Sidhu hoisted a black flag at their residence in Patiala in opposition to the farm laws.

As the farmers’ protest completed 6 months, the government is using the pandemic to turn the narrative in its favour

The Farmers' Produce Trade and Commerce (Promotion and Facilitation) Act, 2020 aims at freeing the farmers from the constraints of the state Agriculture Produce Market Committees whereby they would be able to sell their produce anywhere. Meanwhile, The Farmers (Empowerment and Protection) Agreement of Price Assurance and Farm Services Act, 2020 protects and empowers farmers to engage with processors, wholesalers, large retailers, exporters for farm services. The Essential Commodities (Amendment) Act, 2020 specifies that the supply of foodstuffs including cereals, pulses, potato, edible oilseeds, and oils shall be regulated only under exceptional circumstances.