Ghulam Nabi Azad, senior Congress leader was speaking at J&K's Rajouri where he talked about the operations done by Indian Army against terrorists in the valley 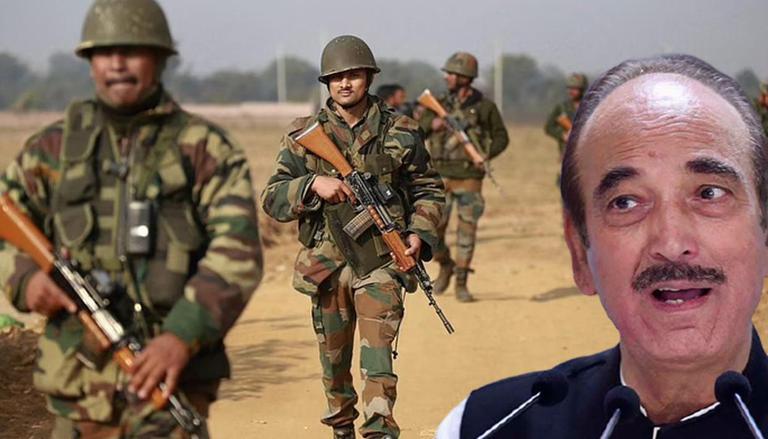 
While speaking on the incidents of civilian killings, senior Congress leader Ghulam Nabi Azad on Friday said that security forces should avoid that. Addressing reporters from Rajouri, the Congress leaders also hailed the Indian Army while adding that they have always done a great job and lost several bravehearts. 'But they should avoid collateral damage during anti-terror operations,' added Azad.

"Sometimes the incident of non militency and civilian killing happen and it is like the game of snake and ladder, you rise by climbing the ladder, which the armymen do by doing excellent jobs but then one snake can push you down, which happens in case of civilian casualities. Our armymen are doing excellent jobs in Kashmir especially here in Rajouri. They have always worked greately and they have lost lives as well," added Congress leader Azad.

He further explained how the Indian Army should deal with militants who are hiding at civilians' residences or in any case where innocent people are involved.

Civilian casualties in encounters with terrorists

Last month, a civilian was killed when an encounter had broken out between security forces and terrorists in the Hyderpora area of Kashmir. The encounter broke out near Classic Hospital here when security forces launched an anti-militancy operation, a police official had informed. He also added that two terrorists were killed in the gun battle and a civilian also died.

Jammu and Kashmir police chief Dilbag Singh, last week had revealed details of the ongoing investigation into the Hyderpora encounter and added that it was suspected the terrorists were supported by a network in carrying out terror activities. A special investigation team has been constituted by the zonal police. According to reports, there are strong pieces of evidence available in this case that will be shared with the authorities concerned very soon, he told reporters. Former Jammu and Kashmir chief minister Mehbooba Mufti and other opposition parties had demanded a probe in the Hyderpora encounter.

According to the police, Mohammad Amir of Famrote village in Ramban was a militant and was killed along with his Pakistani accomplice in the encounter in Hyderpora, where an illegal call centre and a terror hideout were allegedly being run.

(With inputs from PTI and ANI)

WE RECOMMEND
BJP compares Sidhu Moose Wala to Bhindranwale, asks Congress 'how low will you stoop?'