Union Min Giriraj Singh said Congress & Sonia Gandhi are scared because they are the ones who created corruption and nepotism in Indian politics. 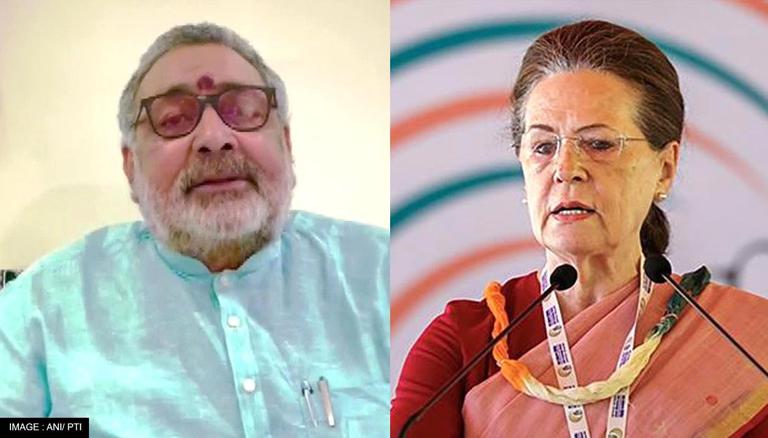 
Union Minister Giriraj Singh on Tuesday backed Prime Minister Narendra Modi's stand over the fight against 'Corruption' and 'Parivarvaad' (nepotism). Targeting Congress and Sonia Gandhi, Giriraj Singh stated that corruption & parivarvad is something very dangerous for our country and the grand old party is the one which has created these challenges in Indian politics, he added. The BJP leader further said that the Prime Minister spoke facts during his 76th Independence Day speech that he delivered from the Red Fort, and asked why is Congress getting scared?

"Prime Minister Modi spoke on Corruption and Parivarvaad stating that is it very dangerous for our country. But why Sonia Gandhi and Congress party is scared? They are feeling scared because Congress is the party that has created corruption and nepotism in politics. Modi Ji gave respect to BR Ambedkar, Netaji Subhash Chandra Bose, Sardar Patel, dozens of revolutionary leaders, and freedom fighters as well, but Congress has glorified only one family, so today they are feeling pain," said Giriraj Singh.

On Monday, PM Modi addressed the nation from the ramparts of the Red Fort on the 76th Independence Day and pointed out two challenges - corruption and parivarvaad (nepotism) - that the country is facing and needs to overcome.

"When I talk of nepotism and familism, people think I am just talking about politics. No, unfortunately, that evil of the political sphere has nurtured familism in every institution of India," PM Modi said.

On one side there are those people who don't have a place to live and on the other, there are people who have no place to keep things they have stolen. We need to fight corruption with all our might," the Prime Minister stressed.

Talking about steps taken to fight this corruption, PM Modi said that in the last eight years, due to direct benefit transfer through Aadhaar, mobile and other technological advancements, Rs 2 lakh crore, which would have ended in the wrong hands, have been used for development.

"The people who looted banks in the previous governments and ran away, their properties have been seized and attempts are made to bring them back. We are trying to recover from those who looted the country. Corruption is eating the country like termites. I'm fighting against it, but I need the support of 130 crore people of the country so that I can win this war," PM Modi said.

The Prime Minister said that awareness needs to be raised against 'Parivaarvaad' to realise the strength of our institutions and to take the country forward on the basis of merit.