In a massive development ahead of the Goa assembly elections in 2022, the Goa Forward Party (GFP) has quit the National Democratic Alliance (NDA).


In a key development ahead of the Goa assembly elections in 2022, the Goa Forward Party (GFP) has quit the National Democratic Alliance (NDA). In a letter penned to Union Home Minister and NDA chairperson Amit Shah, Goa Forward Party president Vijai Sardesai stated that his party will withdraw from the alliance. This comes after a unanimous decision by the GFP leaders. Acknowledging the cracks in the alliance since July 2019, the GFP has cited 'unprecedented incompetence' regarding the governance in Goa. Vijai Sardesai has stated that the Pramod Sawant-led government has introduced 'anti-Goan' policies that affect the people of Goa.

In addition, he has also alleged that the BJP government in Goa is engaged in 'corruption and dishonesty' after Pramod Sawant took over as the state's Chief Minister. Apart from this, Sardesai in his letter has also highlighted several reasons and looming issues like lack of jobs for youth of Goa. Further, he also attacked the BJP for the rising number of COVID-19 cases in Goa during the pandemic's peak. 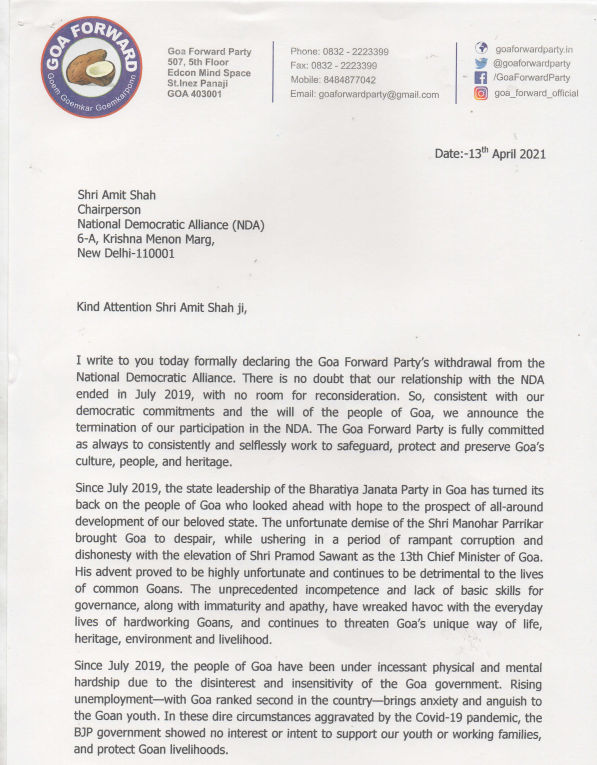 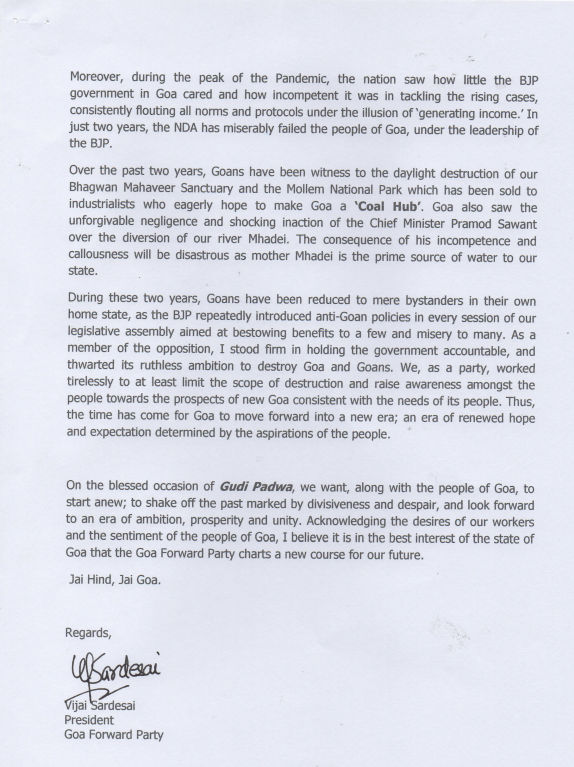 The GFP president also highlighted the issue of industrialists eyeing Goa to turn it into a 'coal hub'. Other reason for the party's decision to quit NDA includes the diversion of River Mhadei. "Mother Mhadei is the prime source of water for our state." said Vijai Sardesai. The letter also mentions that the Goa Forward Party, which currently is in opposition, 'stood firm in holding the government accountable' and 'raised awareness' among the people. Sardesai has concluded his letter by remarking that his party will chart a new course for the future.

The 2017 Goa elections had seen the BJP steal ahead of the Congress to stitch together an alliance to form a government in the state, with its allies placing the condition that Manohar Parrikar be the Chief Minister. On account of this, Parrikar relinquished his charge as the Union Defence Minister and returned to take up the Goa CM's office. His tenure was impacted due to his failing health, however, and following his demise, Pramod Sawant took charge as the CM. Goa will go to polls along with UP, Manipur and Punjab in 2022.