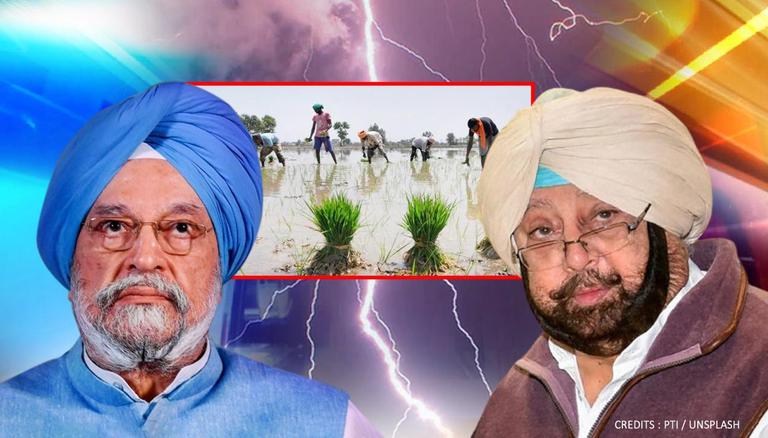 
The Civil Aviation Minister, Hardeep Singh Puri, on Saturday, attacked Punjab government that was caught on the wrong foot on the vaccination front. He reacted to allegations against the Punjab government of earning profits from the COVID vaccination drive by selling vaccines to private hospitals and drew comparisons between Centre and the state government. The union minister said that while Rs 26,000 cr has been transferred to the accounts of Punjab farmers for wheat procurement, Punjab government is profiteering by selling vaccines to private hospitals. By drawing a comparison between both, Hardeep Singh Puri wrote 'the difference in priorities is stark'.

The difference in priorities is stark.

Central govt has transferred ₹26,000 cr directly into the accounts of Punjab farmers for wheat procurement during rabi season.

Following the embarrassment of the alleged scam of selling COVID-19 vaccines to private hospitals, the Punjab government on Friday decided to take back the vaccines. Reportedly, the decision was taken upon the directions of state health minister Balbir Singh Sidhu who also announced an investigation into the sale of the COVID vaccine to private hospitals. Several opposition parties including Shiromani Akali Dal, Aam Aadmi Party and Bharatiya Janata Party slammed the Congress government for selling vaccines to private firms meant to be administered free. The Centre has also asked for a clarification from the state government over reports that it sold Covaxin to private hospitals and earned a profit.

For the first time, the Centre distributed Rs 26,000 crore directly to the accounts of farmers in Punjab. Moreover, farmers procuring wheat during the ongoing rabi marketing season (RMS) were also provided with a total amount of Rs 76,000 crore directly to their accounts. Centre's online payment system has become universal across the country with Punjab and Haryana being the last two states to get direct cash transfer of the minimum support price.

On June 1, Hardeep Singh Puri had exhumed a statement of UPA-era Foreign Minister Salman Khurshid praising China and expressing his interest to live in Beijing and exposed Congress' hypocrisy. Hitting out at Congress, Hardeep Singh said that the Congress leaders praised the development in other countries but are making all efforts to criticize the infrastructural works taking place in India.

Hardeep Singh Puri also put forward a tweet of Congress leader and former HRD Minister Shashi Tharoor who had criticised the Indian Parliament in 2018 while speaking highly of the Malaysian Parliament. Congress along with other opposition parties have vehemently criticised the construction of the Central Vista project by labeling it as a "vanity project". Former Congress President Rahul Gandhi had called it "criminal wastage," and asked the Central government to use the project money on improving medical infrastructure during the COVID-19 pandemic.