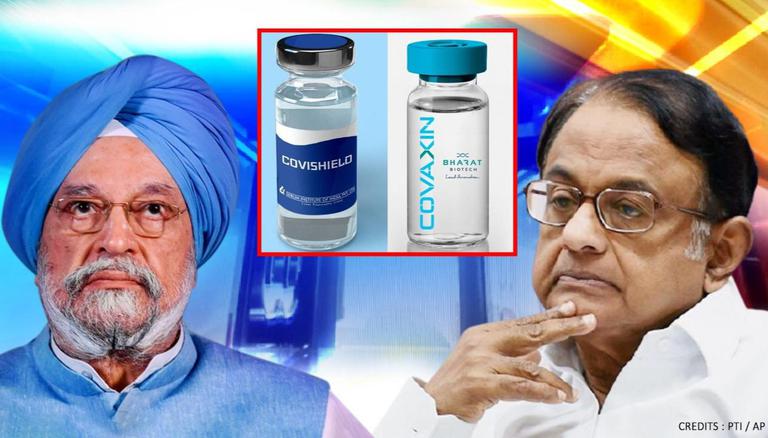 
Union Minister Hardeep Singh Puri on Sunday attacked senior Congress leader P Chidambaram on his demand for a ‘CAG driven audit’ of production and supply of the two domestic COVID-19 vaccine manufacturers to solve the 'mystery of missing vaccines'.

Calling it a ‘confused’ party, Puri stated that some Congress leaders fuelled fear and hesitancy among people about the efficacy of the domestically produced vaccines. While others wanted the same companies to manufacture enough jabs for every Indian, another party veteran has now demanded an ‘audit’ of these firms, he said.

The Minister added that P Chidambaram was a part of the Manmohan Singh Government, which witnessed the dismantling of public sector vaccine manufacturing facilities in 2008. “Is the suggested action against domestic firms designed to facilitate dependence on imported vaccines?” asked Puri, taking a dig at the ex-finance minister.' 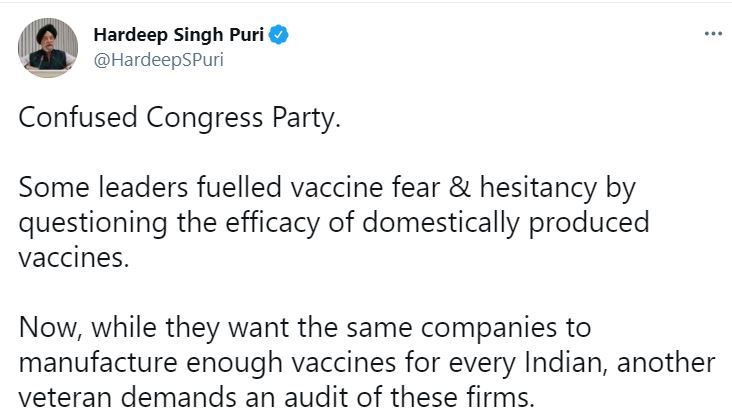 He was a part of the MMS Govt which witnessed dismantling of public sector vaccine manufacturing facilities in 2008.

Is the suggested action against domestic firms designed to facilitate dependence on imported vaccines?

Earlier on Saturday, P Chidambaram had raised questions on 'capacity production disparity on vaccines and demanded a CAG driven audit of capacity, production, dispatch, supply and customers’ lists of the two manufacturers – Serum Institute of India and Bharat Biotech.

He claimed that while there could be a difference in capacity and production, he wanted to know the actual quantity produced so far by the two domestic manufacturers. Chidambaram's statement came a day after Bharat Biotech issued its 120-day process from ordering the vaccine to supply.

The Congress leader claimed that Bharat Biotech's statement on ‘lead time’ required to produce a batch of vaccines has added to the confusion. Targeting corporate companies like Reliance Group, HCL and others, he asked how they were expecting to get vaccines while state governments were unable to get supplies from any manufacturer — domestic or foreign. Reiterating his audit demand, he said it would prevent the public anger over the shortage of vaccines 'pouring into the streets.