"There is no doubt that there has been a mistake. The Congress president has also asked CM Channi to probe the matter," Congress leader Harish Rawat said. 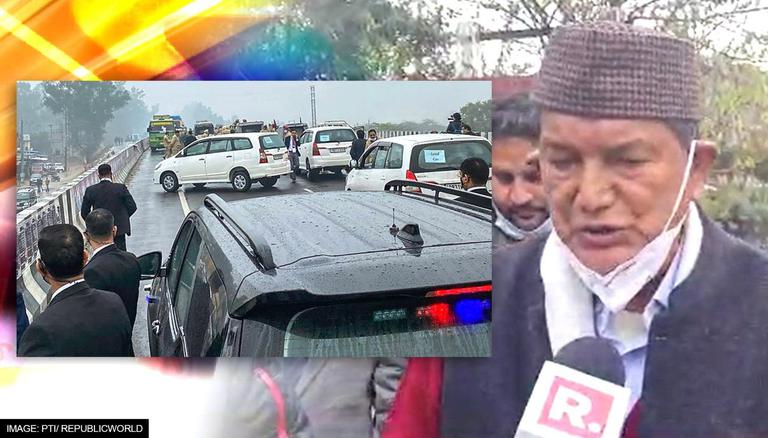 
As the investigation over Prime Minister Narendra Modi's security breach in Punjab continues, senior Congress leader and former party in charge of the state Harish Rawat has admitted that there was indeed a mistake made by the state government and the party high command has asked Chief Minister Charanjit Singh Channi to probe the matter. However, he also shifted the blame towards the Centre by claiming that the area where the PM's security was breached was under the Border Security Force (BSF).

Speaking to Republic, Rawat said, "There is no doubt that there has been a mistake. The Congress president has also asked CM Channi to probe the matter. The state government has also suspended the SSP. Whoever will be found guilty further will also be punished for the same. But can a Prime Minister's protection be dependent only on the state administration?"

He added, "As per the SPG act, even if the DGP is coming in between, he can also get arrested, thats how strong the act is. The incident where this happened was under the BSF. Under the new extension, the area was under BSF.  A detailed investigation should take place and wherever the negligence has happened should also be investigated."

Sources told Republic Media Network that Punjab Chief Secretary Anirudh Tewari submitted the preliminary report on PM Modi's security breach to the Ministry of Affairs. The Charanjit Singh Channi-led government constituted a high-level committee to probe the security lapses during the PM's Ferozepur rally on December 5. As per sources, the state government has informed the Centre that the protesters gathered on the PM's route 'suddenly.'

However, as per top government sources, the Punjab Police took 48 minutes to give a green signal for Prime Minister Narendra Modi to travel from Bhatinda airport to Ferozepur, and then once the PM set out, had 97 minutes to update the Special Protection Group (SPG) on the blockade by the protestors, but failed to do so. This apparent minimum window of 145 minutes that the Punjab Police had at its behest to intimate the SPG of the blockade flies in the face of the Punjab Government which submitted the preliminary report.

How the Prime Minister's security was breached?

The Prime Minister was forced to postpone his Ferozepur rally after being blocked on a flyover for 20 minutes. PM Modi, who was scheduled to inaugurate projects worth Rs 42,750 crore and address a joint BJP-PLC-SAD(D) rally in Ferozepur, returned to Delhi before his scheduled visit to the National Martyrs Memorial via road. Around 30 km away from Hussainiwala, the Prime Minister's convoy was blocked by some protestors. The MHA termed it a major lapse in the security of the Prime Minister and his cavalcade was reversed to Bathinda airport.

As additional security was not provided by the Punjab government, the MHA stated that PM Modi headed back to the Bathinda Airport. Also, it sought a detailed report from the state government and demanded strict action. However, CM Charanjit Singh Channi claimed that the state government had no information of PM Modi's route change. Downplaying the 'security breach' charge, he stated that there was 'absolutely no threat' to the Prime Minister.