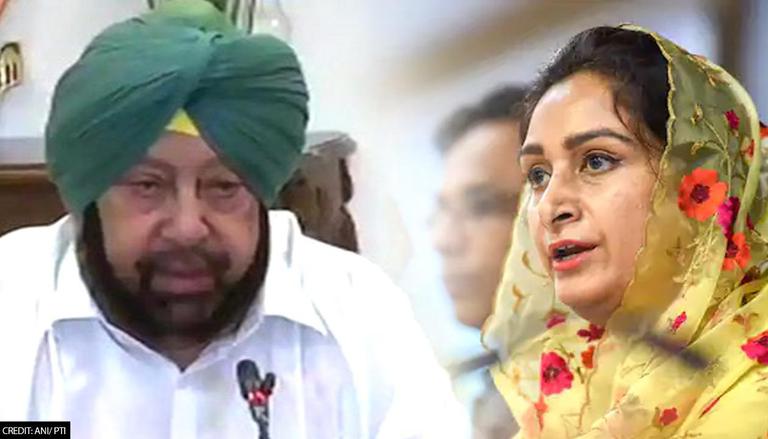 
Shiromani Akali Dal (SAD) leader Harsimrat Kaur Badal on Wednesday, September 15, said that Punjab chief minister Captain Amarinder Singh's "ill-tempered rant" against her proves that he is rattled after being told not to demonise the peaceful and patriotic farmers of Punjab. She alleged that Captain Amarinder is going against the interests of farmers in order to return favours of the Bharatiya Janata Party (BJP).

"The chief minister is bending over backwards to dance to the tunes of the Bharatiya Janata Party (BJP) just because that party had bailed him out of his intra-party crisis by using the threat of central agencies against the Congress MLAs who had rebelled against him. The whole world knows that Captain Amarinder Singh is BJP's 'swatantar fauji' in the Congress and that he is doing everything to keep his real bosses happy," Kaur said. She added, "I realise he owes them a lot, but his gratitude to the BJP must not come at the expense of the anna data of the country from his own state".

'Captain Amarinder is forgetting his dignity and grace'

Balming the Punjab chief minister for creating an economic mess, Harsimrat Kaur said, "The fact is that nobody is sure up to now which party's candidate Captain Sahib would really be in the forthcoming Vidhan Sabha poll. There have been reports that he is prepared to break his own party up if it threatens his CM status. But he repays the BJP by blaming the farmers for the economic mess which he himself has pushed the state (into)."

Saying that she understands the frustration the chief minister is under as he to choose carefully the language in which he is speaking against her, Badal said that Singh is forgetting his dignity and grace, which, according to her statement, a man of his age demands.

Further reproving the Punjab chief minister, Kaur commented, "I understand his problem with me. It is must be pretty awkward and embarrassing for someone to be caught lying and stabbing his own people, especially farmers. He is even putting, on farmers, the blame for the mess that his own misgovernance and ineptitude has inflicted on the beleaguered state."

Referring to Captain Amarinder's silence over the Centre's three farm bills, Badal said that she trusts the chief minister to still have his vision intact even at this age and so cannot believe that he did not see what the whole world saw during the discussion on the three "black bills." "He could not have failed to see that only two MPs in the entire country voted against those Bills, and those two were from the state where he does not want to see the farmers seeking justice," she said.

"I do not feel good at all about it for in Punjab we are taught to respect seniors to the extent of overlooking even their minor flaws. And I would never be disrespectful to anyone if the crucial interests of millions of farmers in Punjab and the rest of the country were not at stake," she added saying that "Captain Sahib| must forgive her for having to speak the truth that is inconvenient to him. "I do not mean to be disrespectful but I cannot help if the truth is (disrespectful). I wish it was not," the SAD leader said.