Informing that the Haryana government is releasing water as per the SC's order, Manohar Lal Khattar said that not a single drop of water is being held. 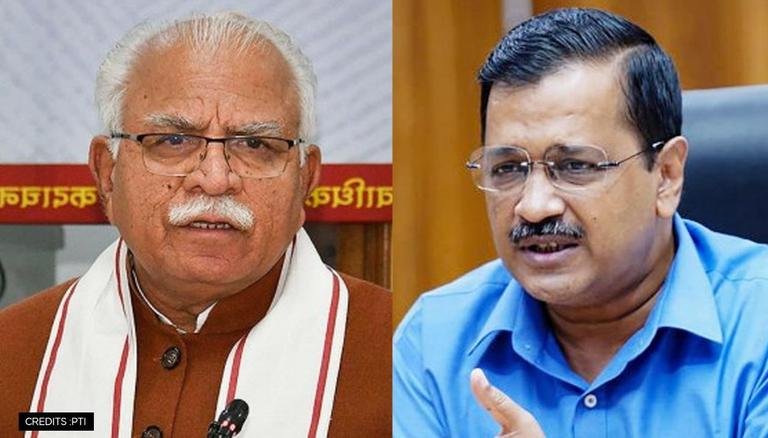 
After Haryana Home Minister Anil Vij said that Delhi CM Arvind Kejriwal has done PhD in lying, CM Manohar Lal Khattar on Tuesday said that the Aam Aadmi Party (AAP) chief has a habit of promoting and praising himself. Informing that the Haryana government is releasing water as per the Supreme Court's order, Manohar Lal Khattar said that not a single drop of water is being held. Remarking that Delhi and Haryana aren't different, Khattar said that Haryana requires 1.5 times more drinking water but it gives it to the National Capital.

Delhi CM has a habit of promoting&praising himself. We're releasing water as per SC's order. Not a single drop of water is being held. We require 1.5 times more drinking water but we give it to them. Delhi & Haryana aren't different, we're neighbours:Haryana CM ML Khattar(13.07) pic.twitter.com/8dPoFsDIBi

Hitting out at Arvind Kejriwal, Anil Vij said that the Aam Aadmi Party (AAP) chief has done a PhD in "lying". Alleging that the Delhi Chief Minister had kept surplus oxygen and lied about it even during the COVID-19 period, Anil Vij said that Kejriwal is once again making false allegations against Haryana regarding water distribution.

While speaking during a press conference, Anil Vij said, "Haryana is continuously supplying 1049 cusecs of water to Delhi through Munak Canal and the Chief Minister of Delhi is making baseless allegations against Haryana by misleading the people of Delhi to hide the internal malpractices and failures of his government."

Admitting that there is a water shortage due to the delay in monsoon, Vij said that Haryana is giving extra water to Delhi than its due share. He said, "Even if there is water shortage, Haryana is managing itself."

Earlier on Sunday, Delhi Jal Board (DJB) vice-chairman Raghav Chadha had said that the water utility has moved the Supreme Court seeking directions to Haryana to release the National Capital's legitimate share of water. He had claimed that Haryana has been withholding 120 million gallons of water a day (MGD) meant for Delhi and that the raw water being discharged into the Yamuna river by the neighbouring state is at an "all-time low".

Currently, Delhi has been receiving 479 MGD against 609 MGD from Haryana. Moreover, the capital draws 90 MGD groundwater and receives 250 MGD from the Upper Ganga Canal. Earlier, Chadha had accused the Haryana government of being ‘solely responsible for the water crisis in Delhi. He claimed that the neighbour state had been supplying 120 MGD less water against the legally prescribed amount.