'If they were really the well-wishers of farmers they would have asked them to get vaccinated or tested', Vij took a jibe on 12 opposition parties 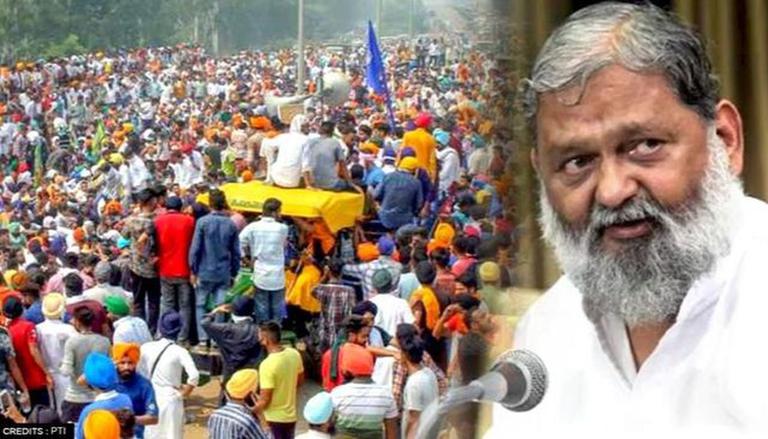 
After farmer unions called for a countrywide protest on May 26, Haryana Health Minister Anil Vij stated that this matter will now be decided by the Central government. Anil Vij took a jibe at the 12 opposition parties-- all those who have extended support for the protest and called them 'fatal' for the farmers. He also questioned the opposition parties extending support to the farmers if they have ever told the farmers to get vaccinated. On Sunday, the leaders of the opposition came forward to extend their support to the farmers by releasing a joint statement. Earlier, the Chief Minister of Punjab Captain Amarinder Singh urged the farmer unions to put an end to the ongoing protest in view of the COVID-19 pandemic.

"Now, this is the matter to be decided by the Central Government. I want to ask the 12 opposition parties did they ever told them to get themselves vaccinated or get tested. If they were the well-wishers they would have said it already. They are fatal for the farmers", said Vij

12 Oppn parties back farmers’ May 26 protest

On Sunday, 12 major Opposition parties extended their support to Samyukta Kisan Morcha’s call for a countrywide protest on May 26, to mark the completion of six months of farmers’ stir against three central farm laws.

“We extend our support to the call given by the Samyukta Kisan Morcha (SKM) to observe a countrywide protest day on May 26 marking the completion of six months of the heroic peaceful Kisan struggle,” the parties said in a joint statement.

The parties that joined hands for the farmers’ cause are Congress, JD(S), NCP, Trinamool Congress, Shiv Sena, JMM, JKPA, Samajwadi Party, RJD, DMK, CPI, and CPI(M). They demanded immediate repeal of the contentious agriculture laws and legal entitlement to minimum support price (MSP) for crops as recommended by the Swaminathan Commission, they said the central government should “stop being obdurate and immediately resume talks with the SKM on these lines”.

Thousands of farmers on Monday set off from Karnal in Haryana for Delhi, where they plan to observe a 'Black Day' on Wednesday, marking six months of their protest against three central farm laws, amid a statewide COVID lockdown. Reports say of many from Punjab's Sangrur have also left for the national capital. Security has been stepped up in Haryana's Hisar district. According to official sources, more than 30 companies or around 3,000 personnel of the Rapid Action Force or RAF have been called into the Hisar district while senior police officials of Hisar Range are holding a meeting on Monday.