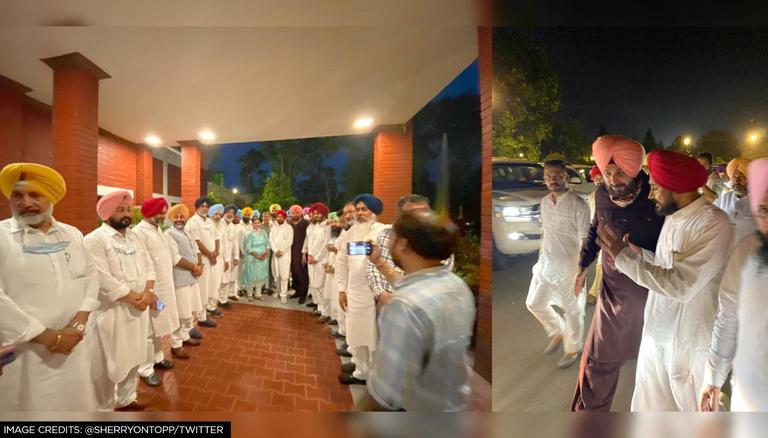 
Punjab Congress chief Navjot Singh Sidhu on Sunday congratulated Charanjit Singh Channi after he was picked as the next Chief Minister of the state. In a tweet, the cricketer-turned-politician said that Channi would be the first Dalit CM of Punjab and his name would be written in history with the golden letters.

Historic !! Punjab’s first Dalit CM-Designate … Will be written with Golden letters in History. A tribute to the spirit of the Constitution and the Congress !! Congratulations @CHARANJITCHANNI Bai pic.twitter.com/WavudGTPok

Rahul Gandhi also extended his greetings and said, "Congratulations to Shri Charanjit Singh Channi Ji for the new responsibility. We must continue to fulfil the promises made to the people of Punjab. Their trust is of paramount importance."

Charanjit Singh will take the oath as Chief Minister of Punjab on Monday, September 20, at 11 am. Addressing media after meeting Punjab Governor Banwarilal Purohit, the CM-elect said, "We have presented our stance, unanimously supported by party MLAs, before the Governor. Oath taking ceremony will take place at 11 am tomorrow."

READ | Who is Charanjit Singh Channi? Everything you need to know about newly-announced Punjab CM

Congress' state observer said that Charanjit's appointment was a unanimous decision taken by party MLAs. Reportedly, the party will also appoint two Deputy Chief Ministers and a possible rejig in the state cabinet.

Channi, a Dalit leader, was a technical education minister in the Amarinder Singh government. He is a three-time MLA from Chamkaur Sahib (2007, 2012 and 2017). In 2015, he was elected as the Leader of the Opposition in the 14th Punjab Vidhan Sabha.

Captain Amarinder Singh resigned as the Chief Minister of Punjab on Saturday after a Congress Legislature Party (CLP) meeting was called without his knowledge. He stepped down from the post after 9.5 years along with his council of ministers. Frustrated and angered over a tussle with Sidhu camp, Singh, in a telephonic call to party president Sonia Gandhi, said, "I cannot run a government like this. It's better that they give the Chief Ministership to someone they trust." In an exclusive interview with Republic Media Network's Editor-in-Chief Arnab Goswami, the Captain dubbed Navjot Singh Sidhu an incompetent and pro-Pak man. While the former CM and Sidhu had locked horns since 2019, things became worse when the Congress leadership picked the cricketer-turned-politician as Punjab Pradesh Congress Commit president, in spite of Amarinder Singh's opposition.