Former Bihar CM Lalu Yadav attacked the BJP-led central government and said the way the saffron party is working, the country is heading towards civil war. 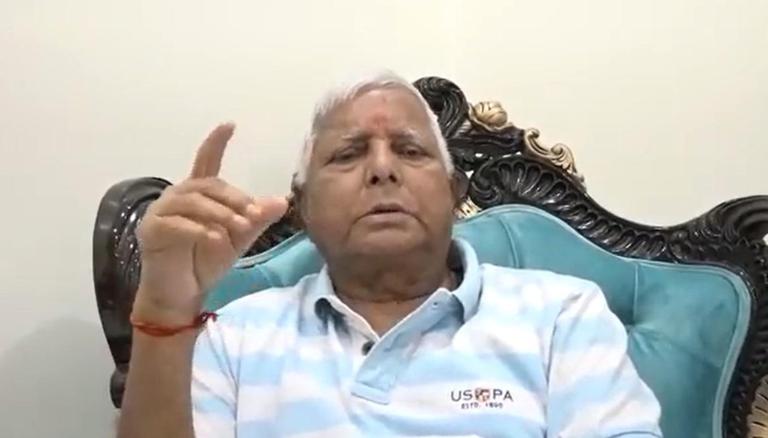 Addressing (virtually) RJD's grand alliance representative conference on "Sampoorna Kranti Diwas" (Total Revolution), Lalu Yadav said, "Jay Prakash Narayan taught us about Sampooran Kranti. Total revolution. He defined it by saying that we need to bring the last man to the mainstream. Under him, youths, students and democratic parties fought against the dictatorship. Today the situation is the same. Dictatorship is on rising. I have said multiple times that the way Bharatiya Janata Party (BJP) is working, the country is heading towards civil war. We need to fight against inflation, unemployment and corruption. I appeal to everyone who is present at the conference that we need to come together and fight and I am assured that we will win."

While the leader of the opposition in the Bihar Assembly and son of Lalu Yadav, Tejashwi Yadav accused the National Democratic Front (NDA) government of pushing the state into unemployment and said that no work is being done by any department of the government. "Bihar remains the centre of unemployment, no work is being done in any department of NDA government... They are just sowing poison in the society," Tejashwi said.

Recently a  fresh case was registered against the Rashtriya Janata Dal chief pertaining to the period when the Manmohan Singh-led UPA government was in power. The CBI in the case has accused Lalu Yadav, Rabri Devi, and other family members of taking land in exchange for providing jobs when he was the Railways Minister between 2004-2009. Raids were conducted at over 15 locations across India, including Delhi and Bihar in connection with this case.

Amid the raids, a massive turnout of RJD supporters was witnessed at the 10, Circular Road residence of the Yadavs, in order to protest against the central agency. They even blocked the officials who had come for questioning and raised slogans. As police personnel struggled to control the situation, Rabri Devi, accompanied by son Tej Pratap and party leaders, stepped out, reprimanded party workers and helped clear the way.

Notably, Lalu Yadav only recently obtained bail in the last of the five cases related to the fodder scam, in which he served half of the jail sentence awarded to him.