Is Farooq Abdullah Optimistic About Taliban Regime? 'Must Build Good Relations With World' 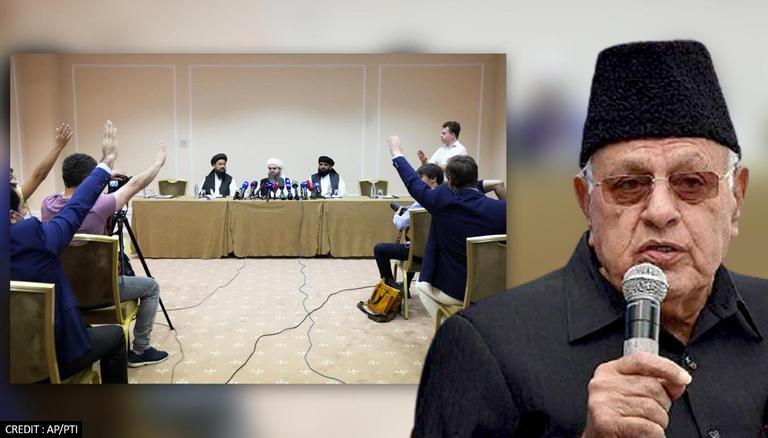 
In a controversial statement, the National Conference president and former Chief Minister of Jammu and Kashmir, Dr Farooq Abdullah advised the Taliban to respect human rights and carry out justice. The statement by Abdullah comes to the fore after the Taliban regime, on September 8, announced their leadership and cabinet portfolios at Afghanistan's state machinery.

The Taliban on Tuesday announced that they had appointed Mullah Mohammad Hasan Akhund as the ‘acting’ Prime Minister in the new Afghan government, with Mullah Abdul Ghani Baradar and Mullah Abdul Salam being his deputies.

“The Taliban must protect human rights in Afghanistan and build good relations with the rest of the world,” he told reporters while speaking at an event honouring Sheikh Abdullah on his death anniversary.

Senior Abdullah further stated that he hopes the Taliban will rule a war-torn nation as per Islamic principles. Last week, his son and NC Vice President Omar Abdullah lashed out at the centre after the Indian envoy in Qatar for the first time, publicly met Taliban leader Sher Mohammad Abbas Stanikzai.

Omar took a dig at India initiating talks with Afghanistan's new rulers, the Taliban. He sought clarity on the central government's approach towards the new regime in the neighbourhood- whether they are viewed as terrorists or not. Meanwhile, Farooq Abdullah further said that he had no idea when elections to the Jammu and Kashmir Assembly would be held.

“I don’t know when elections will be held. (But) whenever they are held, we won’t shy away and rather participate and win as well. The Centre must first restore statehood before holding polls,” he told reporters

Abdullah, an MP from the Srinagar constituency, said that his party was committed to fighting for the restoration of statehood and Article 370. “There is no change in our stance. We are fighting and will continue to fight,” he added. Earlier, Dr Farooq Abdullah voiced his concern on the impact of the Taliban's arrival in Afghanistan on Kashmir

WE RECOMMEND
Farooq Abdullah openly bats for Taliban 'government'; urges talks with other nations
Afghanistan will be governed by laws of 'holy Sharia', says Taliban supreme leader
US, NATO allies back to square one in Afghanistan after the Taliban's takeover: IFFRAS
'You leave Americans behind!' Biden heckled by angry public over Afghanistan pullout in NJ
'Most difficult decision': Ghani justifies fleeing Afghanistan after Taliban takeover