J-K: BJP Hits Out At Mehbooba Mufti For Making Remarks On National Flag 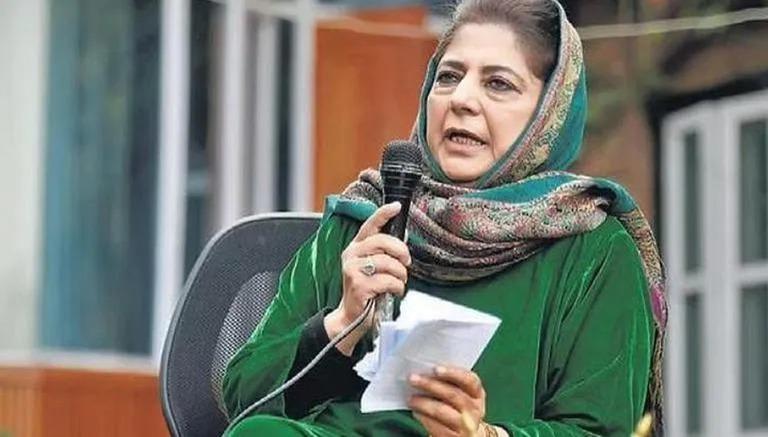 
Jammu and Kashmir unit of BJP on Sunday hit out at PDP chief Mehbooba Mufti for her remarks that the ruling party at the Centre would replace the national flag with a saffron one, saying the Tricolour was the country's pride and whoever looks at it with an evil eye will be dealt sternly.

"Mufti is once again day-dreaming and perhaps far from the reality that Indian flag is flying high and every Indian is feeling proud to be part of BJP," Thakur said.

He said had that not been the case, there would not have been over 300 MPs of the BJP in the Parliament, which is the absolute majority.

Taking a jibe at Mufti, Thakur said for the BJP, the mantra is “nation first, party second and self-third” and there is no question of changing flag or constitution, which is the country's pride.

"The fact is that whosoever looks at the flag with an evil eye, will be dealt sternly," he added.

Thakur said BJP’s workers and office bearers are ready to sacrifice their lives for the honour of Tiranga and making statements that BJP wants to change the flag makes no sense.

"Making these assertions reflect that Mufti is getting frustrated due to the growing popularity of Prime Minister Narendera Modi and his team that is serving the nation to their best capability," he said.

The BJP spokesman said he wonders how Mufti can join Congress leader Rahul Gandhi’s "so-called" Bharat Jodo Yatra when she has claimed that 'if Article 370 was removed, no one would pick up Tiranga in Kashmir'.

Thakur said Gandhi will be holding Tiranga which he will unfurl at Lal Chowk "but how can Mufti bear that despite her anti-Tiranga assertions".

The BJP leader said the fact is every single resident of J-K is picking up Tiranga and Mufti and her "few supporters are lone case who are still objecting to raising Tiranga".

"Who is the real enemy of Tiranga is quite obvious. Under the Prime Minister's slogan of sab ka saath, sab ka vikas, sab ka vishwas, every segment of society was covered irrespective of cast, creed and religion.

"Though some members of the minority community were targeted by terrorists, but security forces acted swiftly to eliminate those who were behind such killings. Rest, all the minorities are feeling secure in J-K and the rest of the country since Modiji took over the reins of the nation," he said.