Congress MLA Kumar Jaimangal's claim that Himanta Biswa Sarma aimed to topple the Jharkhand government fell flat as it emerged that he himself met the Assam CM. 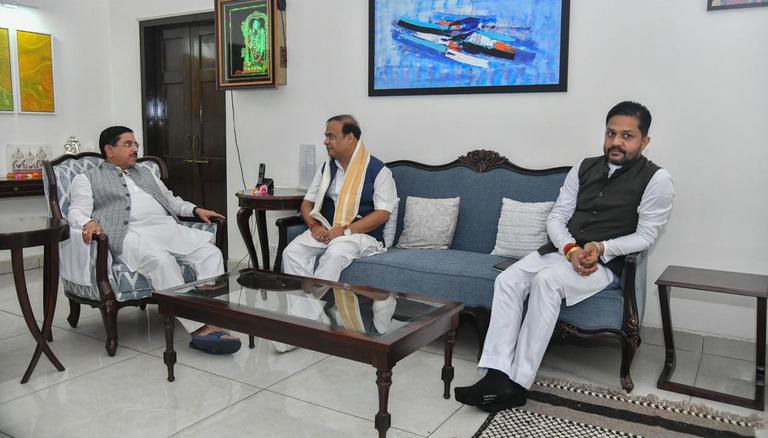 
Congress MLA Kumar Jaimangal's claim that Himanta Biswa Sarma is trying to topple the Jharkhand government fell flat as it emerged that he himself met the Assam CM on July 26- 5 days before filing the police complaint. In his plaint lodged on July 31, Jaimangal had accused three other Congress MLAs- Irfan Ansari, Rajesh Kachchap and Noman Kongari of promising him a meeting with Sarma who he claimed was spearheading the alleged horsetrading operation with the blessings of the BJP high command. Taking to Twitter on Tuesday, Assam Minister Pijush Hazarika debunked this claim.

He revealed that Jaimangal had been regularly meeting Sarma. For instance, Hazarika posted pictures to highlight that the Assam CM took the Congress MLA to Union Coal Minister Pralhad Joshi's residence at 9 am on July 26 in order to help him in a trade union-related matter. Thus, he demanded legal action against Jaimangal for making a false allegation against Sarma and the three other Congress MLAs. Reacting to this, Sarma quipped that the registration of an FIR in Jharkhand on the horsetrading allegation was akin to an accused being asked to file a case.

Fake FIR in #Jharkhand.
The so-called FIR looks like @INCIndia asking Ottavio Quattrocchi to file a case against Bofors. https://t.co/WMDHtxrAzA

Bermo MLA Kumar Jaimangal had claimed, "Shri Irfan Ansari, MLA Jamtara, Rajesh Kachchap, MLA and Shri Bixal Kongari are calling me to Kolkata and offering me money and they are promising 10 crores per MLA. Shri Irfan Ansari and Rajesh Kachchap want me to come to Kolkata and then take me to Guwahati where according to him will make me meet Shri Himanta Biswa Sarma who will give me assurance of a definite ministerial berth apart from the money". The controversy had come to the fore when Ansari, Kachchap and Kongari were arrested in West Bengal after Rs.49 lakh was recovered from their car.

The 2019 Jharkhand Assembly election was conducted in 5 phases. While the polls commenced on November 30, the other phases of voting took place on December 7, 12, 16, and 20. The approximate voter turnout for all 81 assembly constituencies of Jharkhand was 65.17%. The BJP-AJSU alliance was seeking re-election after winning 42 out of 81 seats in the 2014 Jharkhand Assembly elections. However, the opposition alliance comprising Congress, JMM, and Rashtriya Janata Dal secured 47 seats, which is more than the halfway mark in the Jharkhand Assembly with a combined vote share of 35.35%.

On the other hand, the incumbent BJP won from only 25 constituencies with a vote share of 33.37%. The rift in the ruling coalition was on display during the previous round of the Rajya Sabha polls when JMM refused to allocate one seat to Congress. Moreover, the disqualification proceedings against CM Hemant Soren and JMM's decision to back Droupadi Murmu for the Presidential election led to further unease in the alliance. While Congress has accused BJP of trying to topple its government with the help of a few MLAs, BJP has rubbished the allegations.