BJP president JP Nadda while praising PM Modi's speech at the UNGA hailed him to be a true statesman and said that it showed the path of inclusive development. 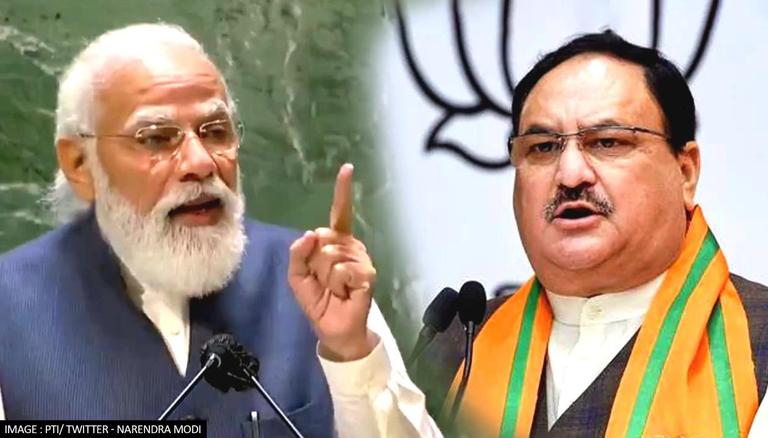 
Prime Minister Narendra Modi on Saturday arrived in New York and spoke at the general debate of the 76th session of the United Nations General Assembly (UNGA). Ahead of his address, PM Modi was welcomed to the General Assembly Hall by UNGA President, Abdulla Shahid, where he thanked the Indian Prime Minister for his continued support towards the 'Presidency of Hope.'

BJP president JP Nadda, while praising PM Modi's speech at the UNGA, hailed the latter as a true statesman and stated that his address showed the path of inclusive development to the whole world.

BJP President JP Nadda was enthralled when PM Modi addressed the 76th UNGA. He articulated the fact how his address had made the whole country proud, claiming that this was a victory for India at a world level. He said that the issues that PM Modi touched upon in his address were 'impressive'.

He responded, "PM Modi has shown the world how India has delivered under Democracy." Nadda also took note of PM Modi's statement during his speech and mentioned how India had led the world in the past seven years.

Nadda while turning his attention to what PM Modi mentioned about the Taliban and its insurgence, asserted PM Modi's clarification on how Afghan soil should not be used for terror activities.

Nadda said, "The way PM Modi has highlighted every issue of India and attracted the world's view over it is appreciable. The PM has motivated the world to come along on the issues of COVID management, COVID vaccination, terrorism & even oceanic boundaries."

During his opening statement at the UNGA, PM Modi highlighted the COVID-19 pandemic. He also addressed the issue of vaccines. While noting that he represents the country that is called the 'Mother of Democracy', PM Modi said, "Democracy is India's tradition."

He then went on to support his claim with his own example saying, "It an example of India democracy that a child who used to help his father at tea stall is addressing UNGA for the 4th time standing in UN. Yes, democracy can deliver. Yes, democracy has delivered.''

PM Modi during his address also indirectly slammed Pakistan and China. He said, "Those countries which are using terrorism as a weapon should understand that it is an equal threat to them."

On the Afghanistan crisis, the PM asserted that India had ensured that the Afghan soil is not used as a 'terror bed' to spread terrorism. "At this time afghans - children, women need help and we must fulfil our duty by providing this help," he added.

WE RECOMMEND
Instances when India gave befitting responses to Pakistan's falsehoods at UNGA
PM Modi congratulates UPSC candidates, has message for those who could not clear exam
PM Narendra Modi’s UNGA address live streaming: When and how to watch
PM Modi invokes Tagore's 'Shubho Karmopathe' to send world message of hope at UNGA
PM Modi lands in New York to address UNGA; expected to speak on COVID, radicalisation