Addressing a workers' convention in Goa on Thursday, BJP president JP Nadda took a veiled dig at AAP and TMC ahead of the Assembly polls due early next year. 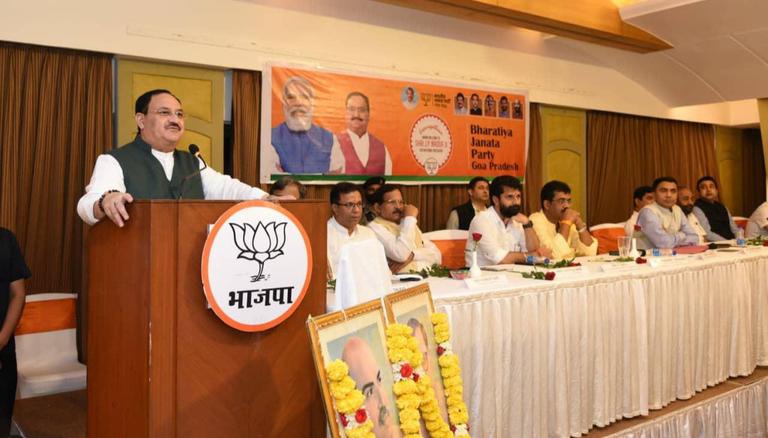 
Addressing a workers' convention in Goa, BJP president JP Nadda took a veiled dig at AAP and TMC ahead of the Assembly polls due early next year. In a reference to TMC's increased footprint in the state, he reminded people of the alleged misgovernance in West Bengal. Similarly, he mocked the Arvind Kejriwal-led party for spending money on advertisements rather than focusing on development. Thereafter, he urged the people of Goa to reject the alternative presented by these opposition parties and vote for BJP again.

"Nowadays, many new parties have come to Goa. Please ask someone what did they do to West Bengal? Today, West Bengal is number one in human trafficking, crimes against women and crime rate. All these things are in West Bengal. If you talk about Delhi, they have passed the buck of creating necessary infrastructure on the Centre and do no other politics than giving advertisements. I wish that the people of Goa should reject them and contribute to ensuring that BJP remains ahead," Nadda remarked.

The political scenario in Goa

Deputy CMs in the Parrikar Cabinet- MGP chief Sudin Dhavalikar and GFP president Vijai Sardesai were sacked from the Cabinet in the next months. Meanwhile, BJP consolidated its position after 10 Congress MLAs including Chandrakant Kavlekar, Atanasio Monserrate, Jeniffer Monserratte, Francis Silveira, Philip Nery Rodrigues, Cleaofacio Dias, Wilfred Dsa, Nilkant Halarnkar and Isidor Fernandes joined the saffron party on July 10, 2019. Both AAP and TMC are seeking to make inroads in the state in the wake of a weakened Congress state unit.