Amid political turmoil in Madhya Pradesh, Chief Minister Kamal Nath has penned a blog and has alleged that BJP is attempting to de-stablise his Congress govt

Amid political turmoil in Madhya Pradesh, Chief Minister Kamal Nath has penned a blog and has alleged that BJP is attempting to de-stablise his Congress government. He has asked if the saffron party is working in tandem with the sand mafias. Claiming that he has never done negative politics, he said that he wishes "Bajrangbali to give positivity to the BJP leaders."

In his letter, he has said, "It is beyond my imagination that in the greed of power BJP has resorted to horsetrading and has overlooked morality. This behavior of BJP netas has harmed the proud history of Madhya Pradesh. I am imagining how and from where has BJP gotten such behaviour? Are they influenced by mafias - against whose illegal business I have taken steps? BJP is simply trying to de-stabilize the MP govt."

"I am confident that my MLA's are with me. I never did negative politics. Even when I was a union minister and in state, there was BJP govt. I helped BJP at that time also." He added: I wish that Bajrang Bali should give his blessings to the BJP leaders so that they get some positivity."

Here is his full blog 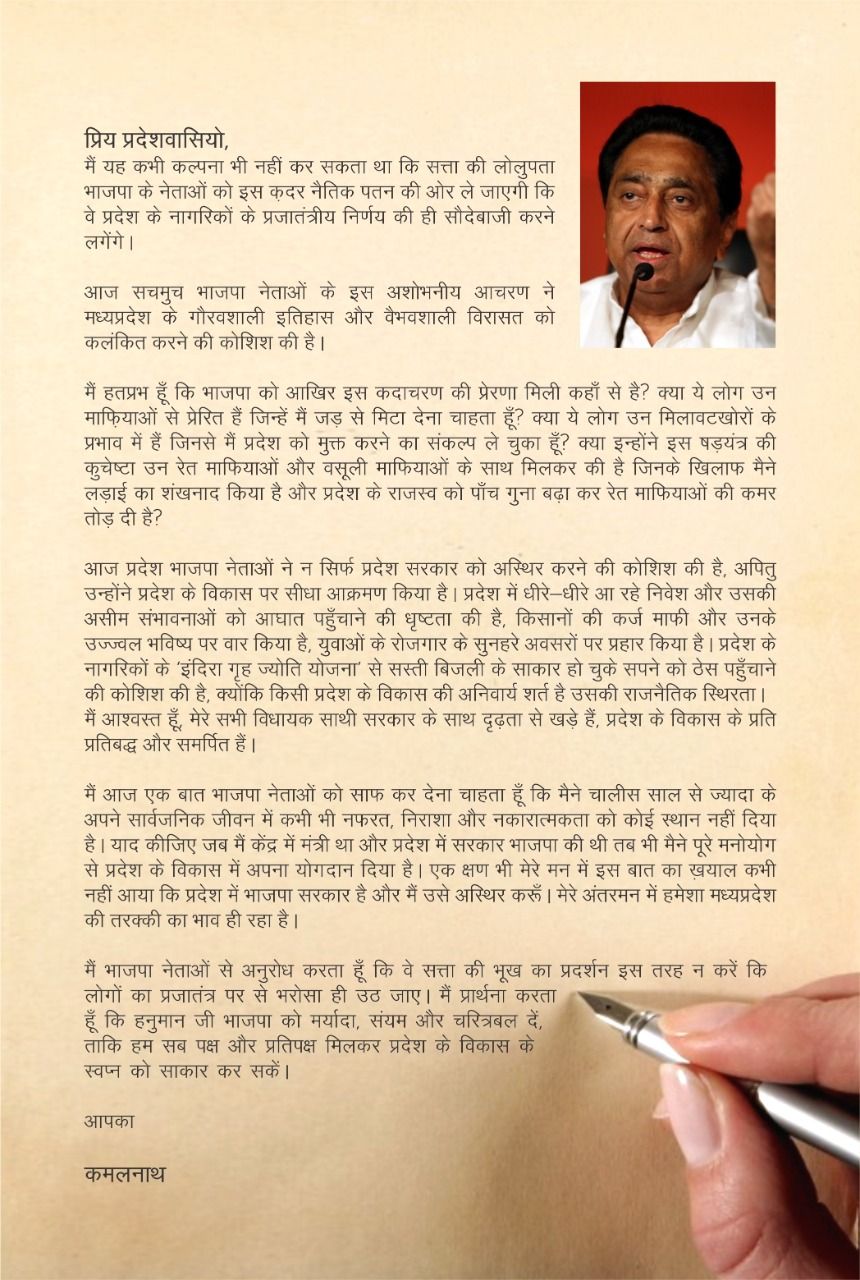 Recently, Congress leader Digvijaya Singh had alleged that BJP leaders Shivraj Singh Chouhan and Narottam Mishra were offering bribes of Rs 25-35 crore to Congress MLAs in order to bring down the Congress government in the state.

Congress leader Randeep Surjewala accused the Bharatiya Janata Party (BJP) of abducting 14 Madhya Pradesh MLAs to bring down the Kamal Nath government in the state. He also demanded that an investigation should be done on who arranged the charter plane to fly four Congress MLAs to Bengaluru.

In 2018 Assembly results, Congress, which won 114 seats in the 230-member Assembly formed the government with the support of four Independent MLAs, two BSP MLAs and a legislator from the Samajwadi Party (SP). The BJP had secured 109 seats in the state Assembly.