Karnataka Congress has launched a fresh attack on the ruling BJP in the State and has now accused MP Tejasvi Surya's uncle of allegedly charging Rs 700 as commission for supplying COVAXIN to private hospitals. An activist, Venkatesh, has accused BJP MLA Ravi Subramanya (reportedly Tejasvi Surya's uncle) of charging Rs 700 as commission per dose for supplying COVID vaccines and furnished a leaked audio conversation that took place allegedly between the activist and a hospital in Bengaluru. The allegations levelled against the BJP MLA comes a day after former Karnataka CM Siddaramaiah had accused South Bengaluru MP Tejasvi Surya of selling vaccines at a service charge of Rs 900 while the govt had reportedly ordered the charge to be capped at Rs 100.

In the leaked audiotape of his alleged conversation with the authorities of Anugraha Vittal Hospital shared with Republic TV, activist Venkatesh is allegedly told that the vaccines were being provided to them via MLA Ravi Subramanya's office. Further, the AV hospital authorities reportedly tell him that the money collected was sent to the MLA's office and that staff from Vasavi hospital administered the vaccine at their hospital as it was their initiative. Further, the person speaking to the activist allegedly told the activist that Rs 700 was per dose was sent to MLA Ravi Subramanya while the hospital retained Rs 200 as the service charge per dose. The activist called for a police probe into the matter and claimed that the truth could be uncovered by investigating the outgoing calls from his phone (with the hospital authorities).

Speaking to Republic TV on Saturday, Basavanagudi MLA Ravi Subramanya categorically denied the allegations levelled against him and labelled them as 'fabricated charges'. The BJP MLA claimed that he had visited AV hospital following which the authorities allegedly clarified with media persons that the former had no connection with the hospital. MLA Ravi Subramanya stated that he was going to file a complaint with the Bengaluru Police Commissioner in addition to filing a defamation suit. He further claimed that he had learned from 'somebody' that the hospital was procuring COVID vaccines at Rs 700 per dose from another hospital, added a service charge of Rs 200 and sold the vaccine at Rs 900 per dose.

Citing the above argument, Ravi Subramanya asked how the Rs 700 per dose would be sent to him as commission. Further, the BJP MLA denied his office's involvement in registration for vaccination and noted that he had no connection with Vasavi hospital's service. The BJP leader claimed that it was being done intentionally & that they were being 'dragged into the picture' and said that the people of his constituency was aware of his efforts and that they would give the response at the right time.

Certain miscreants have used my name in an allegation about COVID Vaccine charges through an audio recording. Visited the 'AV Multispeciality hospital' at Hosakerahalli, where this incident was highlighted in the audio to meet those who have intentionally acclaimed these charges. pic.twitter.com/dWwqhtwKzj

It is a shame that these miscreants have indulged in such transgression, when the world is working towards a common good to help each other during the pandemic. The couple who have colluded should be chastened so that the public is not misguided, with false claims.

Let us all work constructively towards helping each other in a dire circumstance that is affecting everyone alike. Please focus your efforts and time in assisting some, rather than divulging in such a misdemeanor.

Issuing a statement over the allegations, AV Multispeciality Hospitals claimed that there had been a calculated attempt to defame the hospital and MLA Ravi Subramanya. Terming the audio clip as 'maliciously concocted', the hospital claimed the vaccination drive at its premises was an independent one and that the MAL had no connection with it. The hospital said that it would file a criminal case against the person behind the mischievous and criminal act. 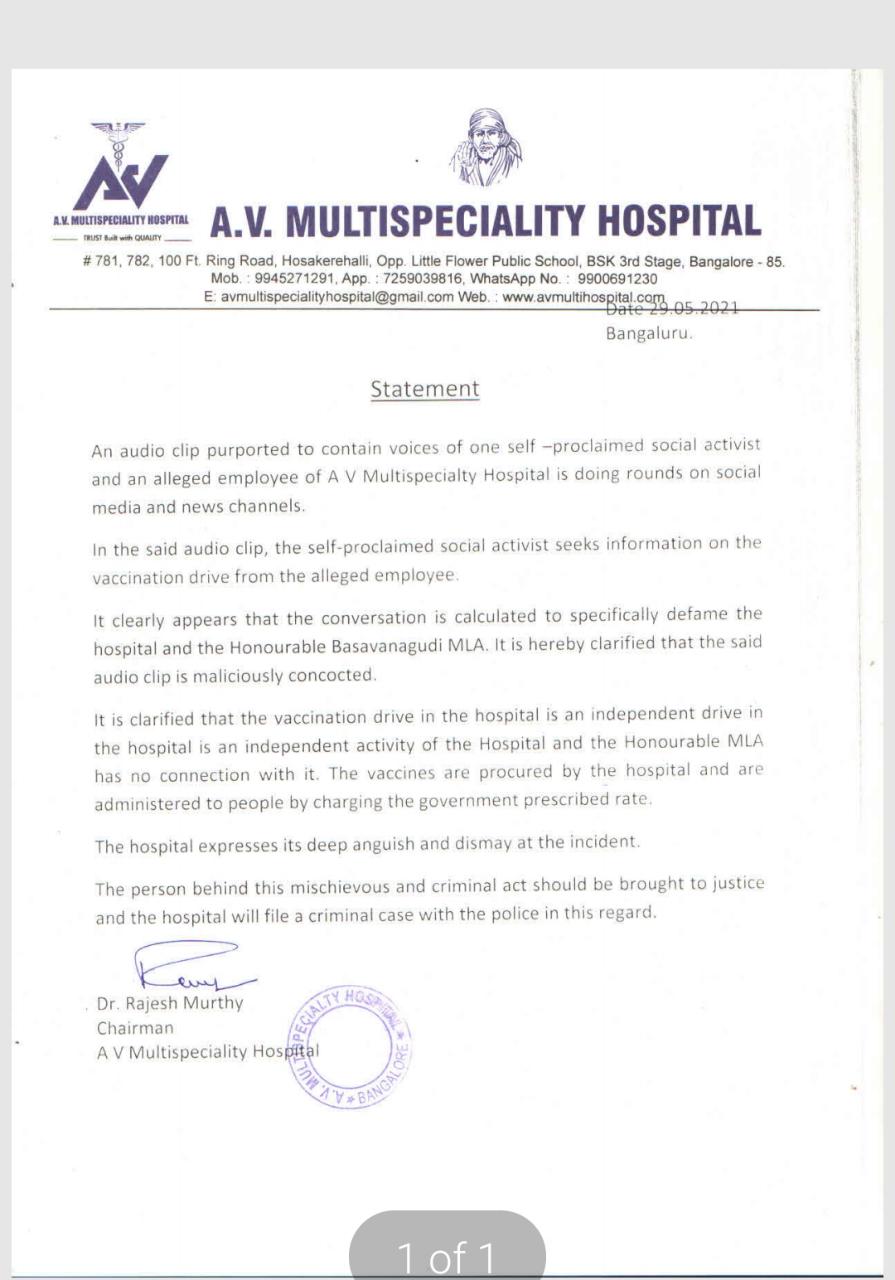 Bengaluru South MP Tejasvi Surya's office has denied such allegations levelled against the BJP's leaders relative and has maintained that they have not contacted any hospital. MP Tejasvi Surya had been accused by the Karnataka Congress of administering the doses of the COVID-19 vaccine at private hospitals with an inflated service charge. The attack on Tejasvi Surya comes after the MP organised a vaccination drive at private hospitals in his constituency.

READ | COVID-19 in Karnataka: No mixing of vaccines in state assures Deputy CM

Former Karnataka CM Siddaramaiah slammed the BJP-led state govt for allegedly lying and demanded transparency. The Congress leader noted that COVID vaccines were being procured by private hospitals from the open market & accused them of selling the doses at varied rates. Questioning the differential pricing offered by private hospitals for COVAXIN and COVISHIELD, former CM Siddaramaiah demanded a uniform rate for COVID vaccines across hospitals. Further, he accused the Karnataka govt of giving a free hand to the private hospitals to 'extort money' and claimed that COVID-19 vaccines were not available at govt hospitals.

Meanwhile, KPCC chief DK Shivakumar termed the allegations against MLA Ravi Subramanya as serious and accused Tejasvi Surya of promoting paid vaccination in private hospitals. The Congress leader sought a suo-motu FIR to be filed and called for a HC-monitored probe alongside seeking the BJP's leader's disqualification from the Speaker.

Allegations against BJP MLA Ravi Subramanya of taking commission for vaccines is a serious one.

A suo-motu FIR should be filed, HC must monitor the probe and they should be disqualified by the speaker.

Yesterday, the Karnataka HC made observations that there are more chances of getting Vaccine from private hospitals than in govt facilities.

It is now evident that there is a scam in vaccine allocation and BJP leaders are involved in diverting govt stock to private hospitals.