Karnataka Chief Minister BS Yediyurappa met PM Modi at his residence in Delhi on Friday, amid the state's row with Tamil Nadu over Mekedatu Dam project 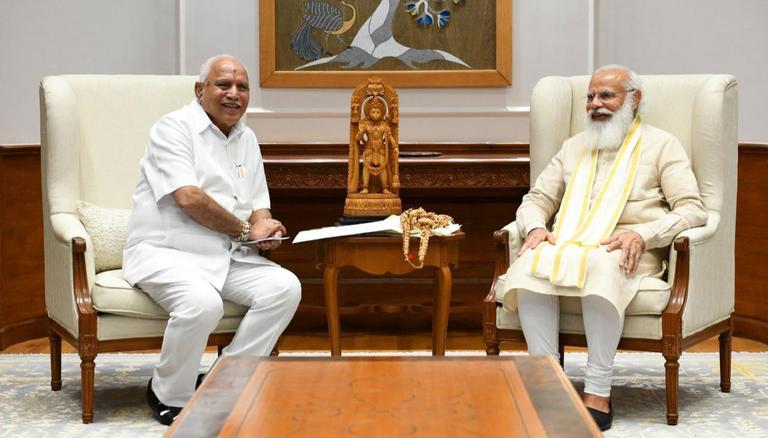 
Karnataka Chief Minister BS Yediyurappa met PM Narendra Modi at his 7 Lok Kayan Marg residence in Delhi on Friday, sparking a fresh row over a possibility of leadership change in Karnataka. However, dismissing the speculations, Karnataka CM Yediyurappa said that he had come to meet PM Modi to seek his permission for developmental activities in his state.

When confronted by media over the possibility of leadership change, CM Yediyurappa said, "I don't know anything about leadership change, you have to say (to media)", while adding that he requested PM Modi to permit to carry out development works in the State.

I don't know anything about leadership change, you have to say (to media). During my discussion with PM Modi, I requested him to permit to carry out development works in the State: Karnataka Chief Minister BS Yediyurappa on leadership change in the State pic.twitter.com/uULokCUBTw

CM Yediyurappa's visit to New Delhi also comes amid the Karnataka's row with Tamil Nadu over the Mekedatu Dam project. The long-standing dispute between Karnataka and Tamil Nadu has resurfaced after CM Yediyurappa-led BJP government hinted at fast-tracking the project despite objections raised by his Tamil Nadu counterpart. Karnataka Home Minister Basavaraj Bommai, on Monday, expressed confidence in getting the Centre's permission for the building of the dam across the Cauvery river amid objections from the Tamil Nadu government.

Karnataka has maintained that the Rs 9000 crore project is essential for the state citing Bengaluru's water woes. Karnataka has assured that Tamil Nadu's farmers will not be affected by the mega-project as it claimed the water flow to Tamil Nadu will not be impacted. Additionally, the Cauvery Tribunal will also monitor the water-sharing agreement between the two states. Moreover, Karnataka has also affirmed that it will ensure water supply to Tamil Nadu and therefore has said that it will go ahead with the project.