Four more MLAs from the Congress-JD(S) coalition government have reached Mumbai's Renaissance hotel. The MLAs who are back in Mumbai are MLA Shivanna, MLA Nagendra, MLA Sudhakar and MTB Nagaraj. Now a total of 16 rebel MLAs are present in Mumbai hotel.

Four more MLAs from the Congress-JD(S) coalition government have reached Mumbai's Renaissance hotel. The MLAs who are back in Mumbai are MLA Shivanna, MLA Nagendra, MLA Sudhakar and MTB Nagaraj. Now a total of 16 rebel MLAs are present in Mumbai hotel.

On Saturday, all senior leaders came together to speak to MLA Nagaraj who had said that he would reconsider resigning from Congress. Nagaraj also said that he wanted to speak with Chikkaballapura MLA Dr Sudhakar, another leader who had resigned.

"Sudhakar has switched off his phone, and is not available for the last two days. After pacifying and convincing Sudhakar, I will try to bring him back. Because we both had resigned together, so we want to be united. I have informed this to Congress leaders," Nagaraj told reporters here before leaving his residence.

But it seems the talks with the senior Congress leaders fell through and the MLA returned to the rebel group. After the development of the MLAs returning to Mumbai, the Congress has now called for a Legislature Party meeting with regards to the situation in Karnataka.

Details of the Saturday meeting:

On Saturday, HD Kumaraswamy and DK Shivakumar met with Nagaraj at Siddaramaiah's residence. "I have confidence on all our MLAs. They have been elected from Congress party & they have been there for a long period. They have fought like tigers in their domain," Shivakumar had said. 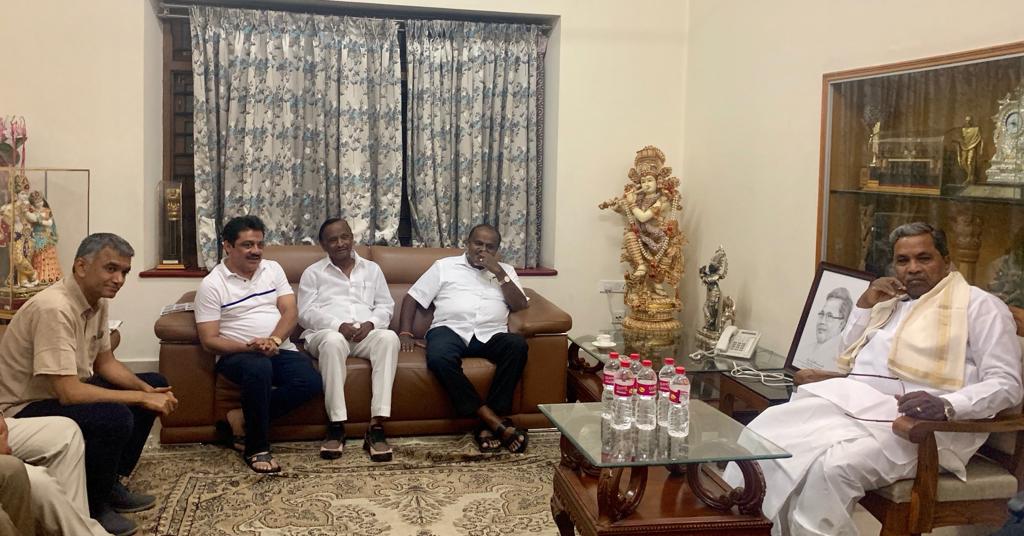 Shivakumar had spoken exuding confidence saying, "At the time of Confidence Motion, they're also well-equipped with law. Law is very clear. If they vote against Confidence Motion,they'll lose their membership. Congress party is ready to settle their demands. We're getting signals that they'll save our government."

The Congress had also held a late night meeting with Dinesh Gundu Rao and KC Venugopal at Taj Vivanta in Bengaluru with Congress MLAs. But it appears that the Congress-JD(S) coalition could not salvage the situation with four more MLAs going in the rebel MLA fold.