Karnataka Home Min was speaking on the matter of the Mekedatu project on Cauvery that the Tamil Nadu Govt has opposed claiming it will divert water flow. 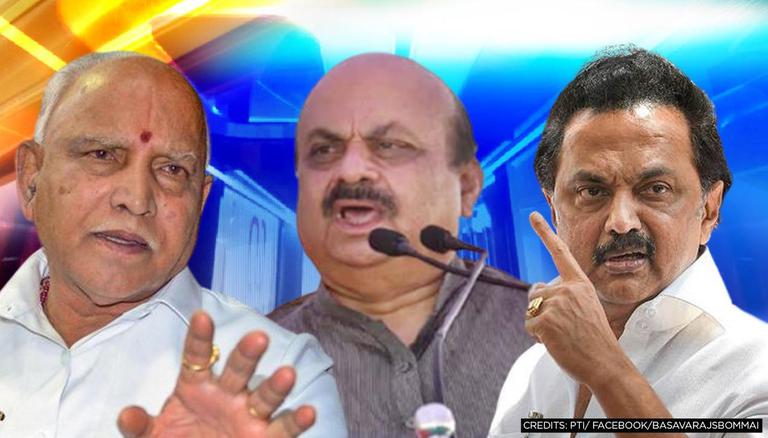 
Amid a tussle between Tamil Nadu and Karnataka Government over the Mekedatu project, state Home Minister Basavaraj Bommai on Monday told ANI that the matter will be fought legally. Speaking on the issue, Karnataka Home Minister alleged the Tamil Nadu Government of 'disputing on Cauvery mainstream or small streams from very long'. The Home Minister made various other allegations including the new govt in Tamil Nadu of trying to start a new 'political adventure'.

According to Basavaraj Bommai, the construction work in Mekedatu has already started.

Tamil Nadu is disputing on Cauvery main stream or small streams from very long. Order from tribunal & Cauvery board is clear. In Mekedatu, we've also started construction in our boundary. If anything submerges it will be in our land: Karnataka Home Min Basavaraj Bommai (04.07) pic.twitter.com/MWdqANJR6J

As Chief Minister MK Stalin requested discontinuation of the Mekedatu project, Karnataka Home Minister said that Tamil Nadu is not deprived of its share of the water region.

"We aren't obstructing their (Tamil Nadu) part of the water region. They've gone to Supreme Court for excess water. Now, the new govt in TN is trying a new political adventure. We'll fight it out legally," added Basavaraj Bommai to ANI.

The Home Minister concluded his statement while claiming that the Mekedatu project will help both Tamil Nadu and Karnataka while adding that they will store water during a shortage of rain. 'We'll get water for drinking purposes, there's no other storage apart from Krishna Raja Sagara. They've objected to it in SC & our lawyers are attending it', mentioned Bommai.

READ | 'Would impound flow of Cauvery to TN': Stalin responds to Yediyurappa on Mekedatu project

On Saturday (July 3), Yediyurappa had written to Stalin in relation to the matter and promised that the project, which aims to provide drinking water to Karnataka will not adversely affect the farming communities of Tamil Nadu, he had asserted that it will, in fact, be beneficial for both the states.