Seeking justice for 22-year-old Altaf who died in police custody, Bhim Army chief Chandra Shekhar Azad, on Sunday, met his family in Kasganj and condoled them 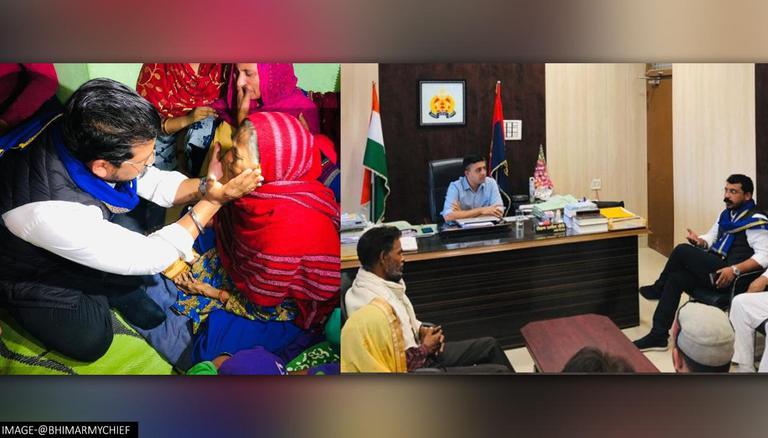 
Seeking justice for 22-year-old Altaf who died in police custody, Bhim Army chief Chandra Shekhar Azad, on Sunday, met his family in Kasganj and condoled them. Later, he also met SSP Kasganj and filed a case against the accused. Taking to Twitter, he claimed that the local administration has assured security, a government job and fair compensation to the family. Altaf who was called for questioning at Kasganj police station in a kidnapping case died in custody on Tuesday.

On Saturday, the National Human Rights Commission took cognizance of the custodial death case. The commission itself will investigate the matter before summoning the answers from the concerned officers. The police claimed that Altaf, 22, had strangulated himself using a string from his jacket hood in the washroom of the police lock-up and said five policemen have been suspended for negligence in the wake of the incident on Tuesday.

Narrating the sequence of events, Superintendent of Police, Kasganj, Rohan Pramod Botre said on Wednesday, "One Altaf (of Nagla Syed locality) was called for questioning in Kasganj police station in a case related to IPC section 363 (kidnapping) and 366 (kidnapping, abducting or inducing a woman to compel her marriage) on Tuesday morning. During interrogation, he requested the policemen to go to the washroom and was allowed to use the washroom inside the lockup where he killed himself". The victim's kin, however, alleged that he was killed by the policemen.

"He was wearing a black colour jacket. He tried to strangulate himself with a string on the (jacket) hood that he tied to the tap of the toilet. When he did not return for some time, the policemen went inside and found him unconscious. He was rushed to the community health centre, Ashok Nagar in Kasganj, where he died, "added the police. The opposition Samajwadi Party attacked the Yogi Adityanath government for "yet another custodial death", saying that criminals and police are committing an "encounter" of law and order in the state under the BJP rule.

The family has said police are showing a letter purportedly signed by the victim's father, which gives a clean chit to the men in khaki, and alleged that it was obtained under pressure. Abrar Ahmad, the paternal uncle of Altaf told reporters here that the letter that carries Altaf's father's thumb impression "has been managed through police pressure". Abrar said the Kasganj police has given a sum of Rs 5 lakh to one of the family members but he is not aware as to whom the money was handed over as his brother is in no condition to speak. Students of the Aligarh Muslim University (AMU) took out a protest march on the campus on Thursday and demanded a judicial probe by a sitting judge of the Allahabad High Court.