Kerala votes in a single phase on April 6 where the Congress, ruling CPI (M), and the BJP are contesting from various constituencies for 140 seats

A day after senior party leader PC Chacko quit Congress, opposition leader Ramesh Chennitala on Thursday filed a complaint against Chief Minister Pinarayi Vijayan, with the Chief Electoral Officer, alleging that he violated the Model Code of Conduct before the 2021 Assembly polls by announcing a string of new programmes and policies. Chennthala alleged that the CM made these announcements during press meets in the poll-bound state, on March 4 and March 6.

The state of Kerala has witnessed intense political debates with the Union Home Minister Amit Shah recently taking a jibe at the incumbent Kerala CM, where the former targetted seven-question at Pinarayi, seeking answers over 'the illegal gold found in the Kerala airport'. Shah had asked "Did your (Pinarayi) office mount pressure on the customs when illegal gold was found?" Shah was referring to the 550 kg of gold that was unearthed by the Customs department last year in Kerala. 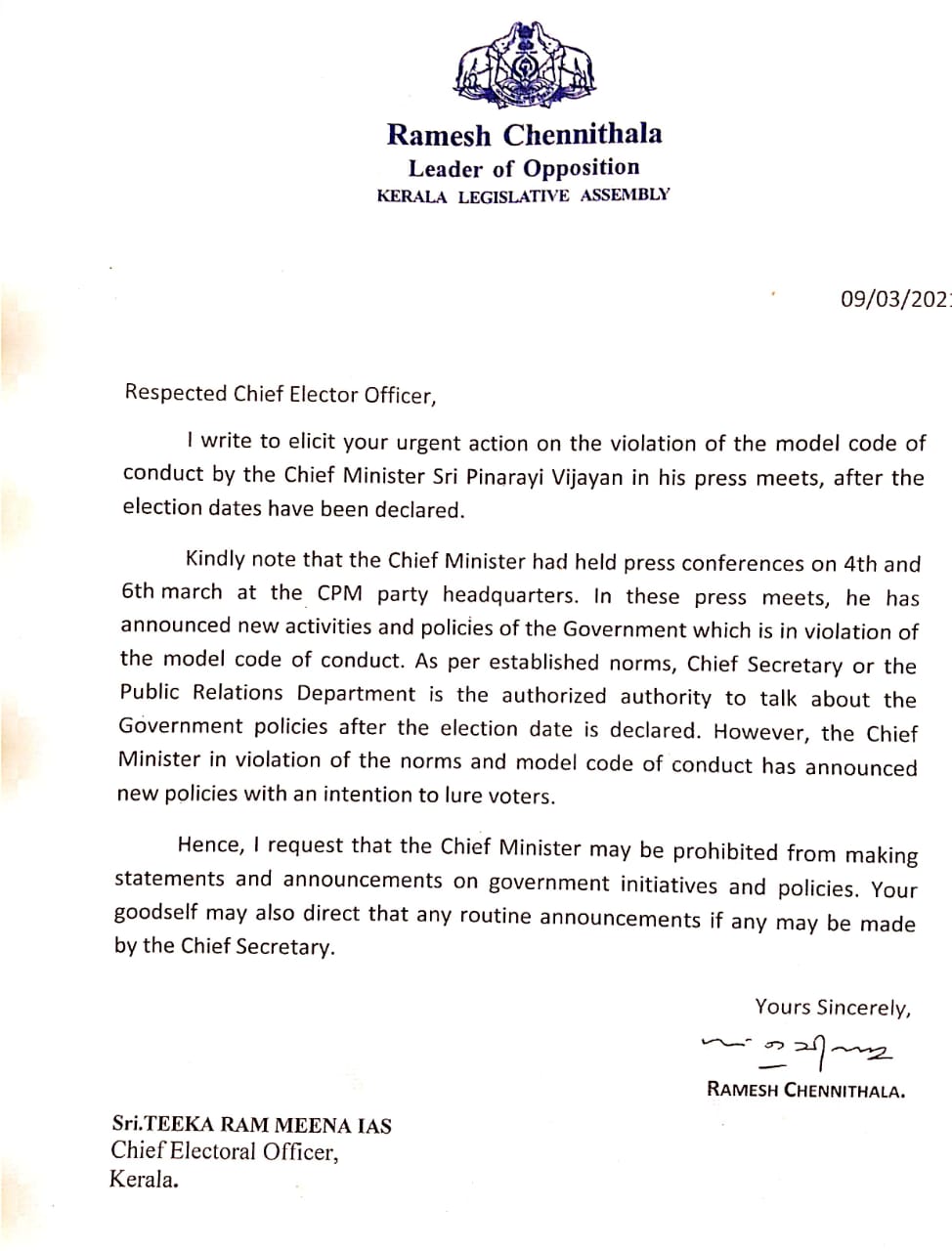 War of words amid major political developments in Kerala

CM Vijayan had reacted to allegations raised by Shah against his government and had slammed the latter for "insulting Kerala." The CM also revealed that the Customs department "had made certain shocking revelations against the CPI (M) leader P Sreeramakrishnan and a few of his ministers" in connection with the Kerala gold scam, Vijayan had pointed.

Taking a salvo at Shah, the Kerala CM had then said "Weren't Sangh Parivar people appointed intentionally to various posts at Thiruvananthapuram airport to facilitate gold smuggling? The probe was going in the right way. Wasn't the probe direction changed when it was pointing towards your own people? Wasn't it your party channel's head who prompted the accused to say this wasn't a diplomatic baggage?"

He had further asked Shah, "Aren't you aware of the leaked audio clip alleging that the probe agencies put pressure on the accused to take the name of the Chief Minister?"

Meanwhile, premier investigating agencies of India are probing the matter. Also, the opposition BJP is allegedly using the Kerala gold scam to derail the political existence of Pinarayi Vijayan and his party in the state. Kerala votes in a single phase on April 6 where the Congress, ruling CPI (M), and the BJP are involved in a heated political battle. The parties will contest from various constituencies for 140 seats.