A violent clash between the protesting farmers and Haryana Police in Hisar led to 20 police personnel sustaining serious injuries. 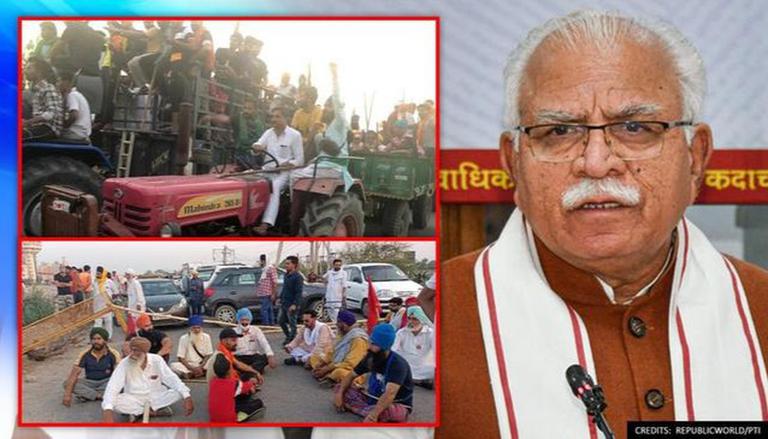 
After disrupting an event attended by Haryana Chief Minister Manohar Lal Khattar, a group of farmers protesting against the three contentious farm laws staged a protest outside Hisar Inspector general (IG) on Sunday evening. The farmers congregated outside the Hisar IG's residence, led by Kisan leader Gurnam Singh Charuni, demanded the release of farmers arrested for allegedly protesting against CM Manohar Lal Khattar while he inaugurated a 500-bed COVID hospital in Hisar. Along with Charuni, farmers raised slogans against the Haryana police and the state government.

In a separate incident, a violent clash between the protesting farmers and Haryana Police in Hisar led to 20 police personnel sustaining serious injuries. Amongst those injured, 5 are said to be women cops. The injured personnel are currently receiving treatment. Moreover, five vehicles are also reported to be damaged by farmers in the protest. Meanwhile, farmers also blocked the KMP highway for two hours against the alleged police brutality in Hisar.

The protesting farmers on Sunday moved from the border areas to Haryana's COVID-19 care centre in Hisar where Chief Minister Manohar Lal Khattar was inaugurating a 500-bed hospital. On-ground visuals show that the protesters turned violent resulting in lathi-charge and tear-gas usage by the state police.

Sources suggest that the farmers who are protesting against the three farm laws in Delhi borders have now decided to interrupt every proceeding of the Haryana government. A huge crowd gathered at the site all of a sudden as security forces were deployed in the area and a clash broke out between them. The clash took place as the farmers tried to break the barricades placed by the police with their tractors. The Samyukta Kisan Morcha protesting on the border also backed the protest.

Earlier in January, thousands of protesters had reached the venue of a high-profile “kisan panchayat” organized by the BJP in Haryana forcing the Chief Minister to cancel his visit. Clashes took place between BJP supporters and opponents in the Kaimla village in Karnal district.

Meanwhile, the Samyukta Kisan Morcha, on Saturday announced that they will observe May 26 as Black-Day to mark the six months of their protest against the three farm laws. The farmer leaders have urged fellow protesters to raise black flags from their houses. Thousands of farmers from across the country are currently protesting at Tikri, Singhu and Ghazipur borders around the national capital.