Kumaraswamy Hints At Backing Murmu In Presidential Poll, Says 'She Already Has Majority'

Kumaraswamy said that he was aware of her life journey, and her attempt to seek JD(S)' favor despite having a considerable majority showed her generosity. 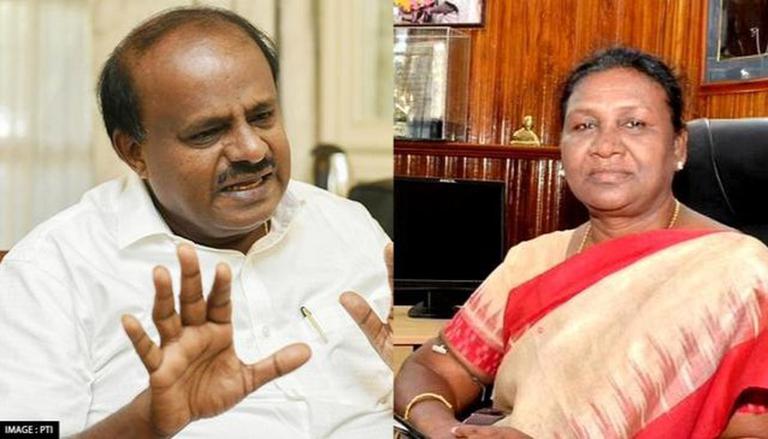 
With just days left to go for the Presidential Elections, former Karnataka Chief Minister and Janata Dal (Secular) leader H. D. Kumaraswamy stated that discussions were on within the party to back NDA presidential candidate Droupadi Murmu. Speaking to reporters, Kumaraswamy revealed that Murmu had requested time to meet JD(S) patriarch H. D. Deve Gowda, however, the party had assured her that she did not need to visit Bengaluru physically to seek votes from them.

Lauding her demeanour, Kumaraswamy said that he was aware of her life journey and background, and her attempt to seek JD(S)' favour despite having a considerable majority showed her generosity. Notably, Kumaraswamy and his father Deve Gowda were part of the Opposition meeting called by Mamata Banerjee in Delhi a few weeks back.

"She (Droupadi Murmu) has already spoken with our national president over the phone. She even requested time to visit Bengaluru either today or tomorrow. I requested the National President that in the present situation, she need not come here physically to seek votes. As a candidate in the election, I have also observed her background. I had observed her life journey and her struggle in society," said H.D Kumaraswamy.

'She already has the majority numbers. Despite that to maintain a cordial relationship and to seek the votes, she sought time to visit Bengaluru, this shows her generosity. According to me, she has already won. Despite that, she wanted to visit Bengaluru to meet Deve Gowda Ji. I told Deve Gowda Ji that she need not come, we will discuss it amongst ourselves within the party," he added.

The JD(S) leader further asserted that Presidential elections were not a matter of Congress or BJP, and it all boiled down to the background of both candidates. "There is no question of 'B' team. Whatever decision we are going to take on the Presidential elections, there won't be a question arising of a 'B' team in that. We will see the background of both the candidates and decide," he said.

Former Jharkhand governor Droupadi Murmu is the candidate for the NDA, whereas Yashwant Sinha, who served as Finance Minister under the Atal Bihari Vajpayee administration, is the candidate for the opposition in the Presidential Elections 2022. Murmu will be the first President ever to be born in the post-Independence era if elected. It is also important to mention that she will be India's second female president and the first woman from a tribal community to hold the office of President.

READ | TRS pans Murmu over power issues in her village, asks 'what will she do for tribals?'
READ | JD(S) indicates support to Murmu for President, formal announcement soon
First Published: 30th June, 2022 09:10 IST
SUBSCRIBE TO US