Karnataka is all set to go into bypolls for the Sindagi and Hangal assembly constituencies on October 30. 37 candidates have filed nominations. 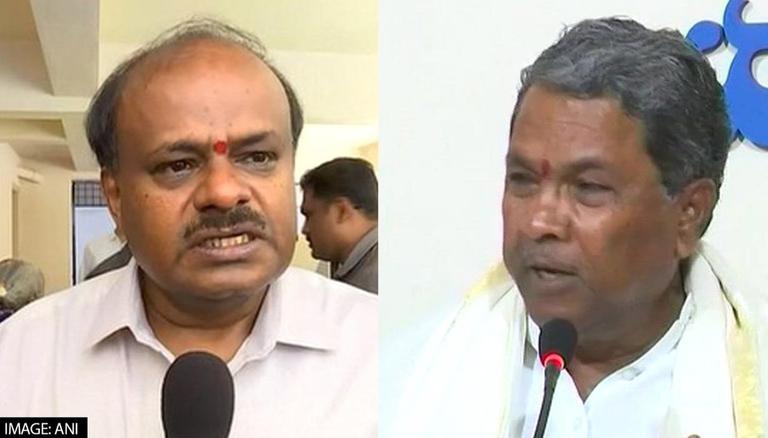 
Ahead of the upcoming assembly polls in Karnataka, the verbal duel between former Chief Ministers and political rivals Siddaramaiah and HD Kumaraswamy continued to intensify as JD(S) leader Kumaraswamy accuses the Congress leader of betraying the party that gave him "political birth".

Slamming former Chief Minister and Congress leader Siddaramaiah for his remarks on the Janata Dal (S) party, Kumaraswamy said, "He is the JD(S) person who betrayed the very party which had given him political birth and criticises it again and again without any reason." Taking a step forward, he said that the Congress party could never come at second place in the Sindagi constituency bypolls.

"Unless Siddaramaiah criticises JD(S) party, he won't get any sleep. His party had come in third in the Sindagi constitution during the last election", he added.

In a series of tweets, Kumaraswamy gave a befitting reply to Siddaramaiah's remarks. He said, "I sympathize for those who daydream they are repeatedly saying the same thing about the JD(S) party and HD Kumaraswamy however it is a necessity for him to criticize us."

Earlier on Saturday, Congress leader Siddaramaiah was campaigning for the Congress candidate in the Sindagi constituency and it was during that time when he made certain remarks against the opposition party and said that intelligent voters do not work for JD(S) as it is a 'sinking party'.

While speaking to the media, he said that JD(S) has lost its popularity in Mandya and has become weak.

Thereafter, responding to the statements on Sindagi voters, Kumaraswamy questioned, "The wise voters would not vote for the JDS party #ಸಿದ್ಧಹಸ್ತರು Furman has issued. Are people in his pocket? This is an arrogant statement that insults the people of Sindagi. They will answer right away."

It is not the first time when Siddaramaiah passed remarks at the JD(S) party. Earlier, slamming them for fielding Muslim candidates from the Sindagi and Hangal constituencies, he said, "I don't know, ask Kumaraswamy (JDS leader), but their intention is not good, because their intention is not to make minorities win. If they had the intention to ensure minorities win, they could have given tickets in other constituencies like Ramanagara, Hassan, Mandya (JDS stronghold)."

Meanwhile, Karnataka is all set to go into bypolls for the Sindagi and Hangal assembly constituencies on October 30. Concerning the same, 37 candidates have filed nominations earlier on Friday including eight from Sindagi and 29 candidates from Hangal.