Slamming PM Modi's silence over the death of farmers in the Lakhimpur violence, AAP MP Sanjay Singh questioned as to what 'festival' the PM was celebrating 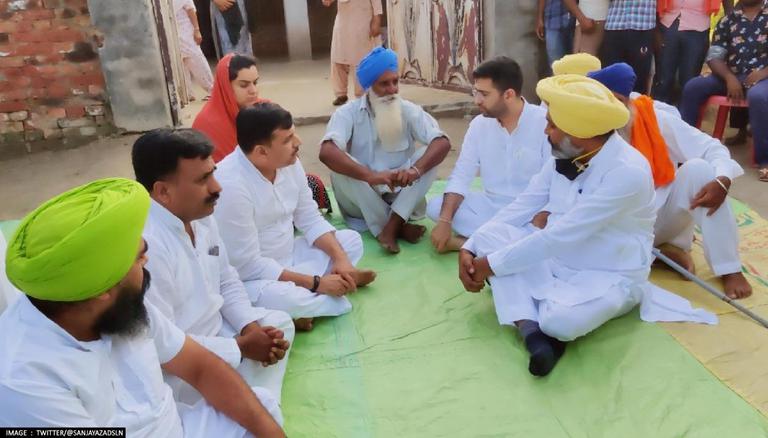 
Slamming PM Modi's silence over the death of farmers in the Lakhimpur violence, AAP MP Sanjay Singh on Wednesday, questioned as to what 'festival' the PM was celebrating. Claiming that PM Modi had time to tweet on Argentinian football star Deigo Maradona's death, he said that PM Modi should be ashamed of the incident. Four farmers and four others were killed in Lakhimpur after clashes between protesting farmers and BJP workers. No arrests have been made till now.

Singh, accompanied with AAP MLA Raghav Chadha visited the farmers victims' families in Lakhimpur on Wednesday. He also visited the house of journalist Raman Kashyap who was also killed in the violence and expressed anguish that no arrests have been made till date in the case. Similarly, Rahul and Priyanka Gandhi too visited the victims' homes - demanding accused Ashish Mishra's arrest.

On Sunday, farmers were protesting against the Farm Laws at Lakhimpur Kheri outside an event venue where Deputy CM Keshav Prasad Maurya was scheduled to attend. As farmers displayed black flags along the path from the helipad to the venue, Sanyukta Kisan Morcha (SKM) claimed that one of the farmers was shot dead by Ashish Misra - son of Union MoS Ajay Misra Teni and two farmers were killed after his car ran over them and turned turtle. In retaliation, farmers resorted to stone-pelting at the car which had overturned, killing 4 BJP workers - including Misra's driver. Clashes ensued after the incident resulting in many injuries and section 144 has been imposed throughout the district

Most politicians like  Akhilesh Yadav, Deepender Hooda, Chandrashekhar Azad, Sanjay Singh, who had attempted to visit Lakhimpur were detained and allowed to enter the district only later. With Union MoS Ajay Misra and his son - Ashish Misra refuting the farmers' claims, UP govt announced it will give Rs 45 lakhs to the 4 farmers' families and  Rs 10 lakhs will be given to those injured. The deceaseds' kin will also get a govt job and probe headed by a retired High Court judge will be done. A CJI-led SC bench has taken suo-moto cognizance of the matter after two UP lawyers sent a note.

WE RECOMMEND
'UP is mourning..,' says Akhilesh Yadav over Lakhimpur, avers 'not the time for festival'
Key Court Cases On Oct 7: From Lakhimpur Kheri violence to Avantha Group Promoter's bail
Lakhimpur: Priyanka & Rahul Gandhi demand arrest of Ashish Mishra after meeting farmers
MP Sanjay Singh, other leaders arrested in UP: AAP
Lakhimpur: MVA calls for a strike in state it governs; wants 'Maharashtra bandh' on Oct 11