Released from jail recently after getting bail in the fodder scam case, Rashtriya Janata Dal supremo Lalu Prasad Yadav on Friday ringed in his 74th birthday. 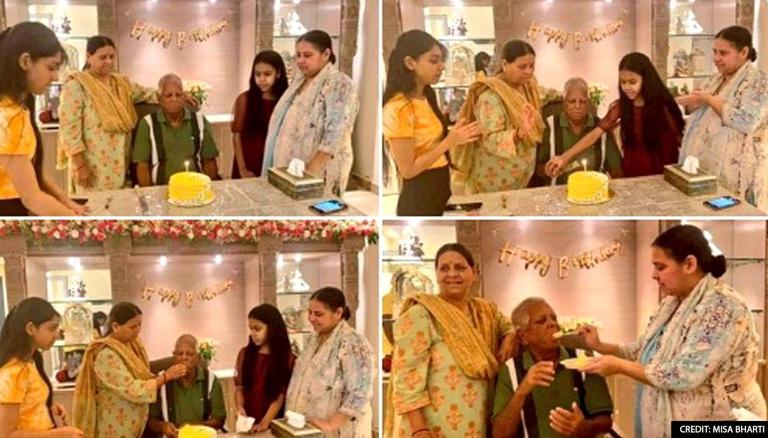 
Released from jail recently after getting bail in the fodder scam case, Rashtriya Janata Dal supremo Lalu Prasad Yadav on Friday ringed in his 74th birthday. Contrary to what happens on the birthdays of other party leaders- messages from eminent leaders, sometimes even of the opposition parties floating on Twitter, so much so that it actually starts to trend, the maverick strongman of Bihar was rather silent, with just a few wishes from daughter Misa, and just a few political friends like Akhilesh Yadav & Hemant Soren.

Taking to her official Twitter handle, the daughter of Lalu Prasad Yadav, Misa Bharti shared images of his small midnight birthday celebration. From what is evident from the pictures, it was not anything as grand as the birthday parties of the past years, which had hundreds in attendance and a humongous cake in front of him that he would cut with a sword-like knife, rather it was a closed celebration with just his wife Rabri Devi, daughter Misa Bharti and a few children of the family around and a small cake in front, which he can be seen cutting with a normal knife.

Misa Bharti captioned the pictures as 'Papa is my world, where Papa is, there lies my world'.

None from the Congress or the BJP of eminence came forward to wish the once 'don of Bihar'. There were just a handful of leaders, who remembered his birthday and came forward to wish, among them were Akhilesh Yadav, Chief Minister of Jharkhand Hemant Soren, and Chief Minister of Chattisgarh Bhupesh Baghel. Akhilesh Yadav shared an old picture with Lalu Yadav and wished him on his birthday. CM Soren called him a 'protector of poor and down trodden' and wished him on his birthday while CM Bhupesh Bagehl on the occasion, wished for his good health and long life.

Lalu Prasad Yadav's story- From past to present

Lalu Prasad Yadav has been an indispensable part of politics in Bihar. He entered politics at Patna University as a student leader and was elected as the then youngest member of the Lok Sabha in 1977 as a Janata Party candidate at the age of 29. He became the Chief Minister of Bihar in 1990 but had to resign in 1997 due to allegations related to Fodder Scam. Then he contested the Lok Sabha polls in 1998 from Madhepura, defeating Sharad Yadav and entering the Lok Sabha again. He lost to Sharad Yadav in 1999 but was soon elected to the Rajya Sabha. In 2004, he was elected from both Chhapra and Madhepura and joined Manmohan Singh’s government at the Centre as the Railway Minister. In 2009, he won from Saran again. He was an MP from Saran when he was convicted for the first time in 2013 but later was granted bail by the Supreme Court.

In 2017, the CBI held him guilty in one of the cases related to the Fodder Scam and a special court sentenced him to 3.5 years of imprisonment, and then again in 2018, in relation to another Fodder Scam case, he was sentenced by a court 14 years of imprisonment. Several times during the years, the veteran leader approached the Supreme Court, seeking some relief, sometimes on the pretext of family issues and sometimes on the pretext of health but it was always rejected until in April 2021, he was finally granted bail.