In another blow to Chirag Paswan-led LJP, its lone legislator Raj Kumar Singh joined JD(U) in the presence of Bihar Chief Minister Nitish Kumar on Tuesday.


In another blow to LJP, its lone MLA Raj Kumar Singh joined JD(U) in the presence of Bihar Chief Minister Nitish Kumar on Tuesday. This comes just a month after the only MLC belonging to the Chirag Paswan-led party switched allegiance to JD(U). Singh had drawn the party's ire recently after he voted in favour of JD(U) candidate Maheshwar Hazari during the election held for the post of the Bihar Assembly Deputy Speaker. In fact, LJP’s national secretary-general Abdul Khaliq had asked the MLA from Maithani in the Begusarai district to explain the reasons for the same. As per the notification of the Bihar Assembly Secretariat, the Speaker had formally recognised Singh as a member of the JD(U) Legislative Party. 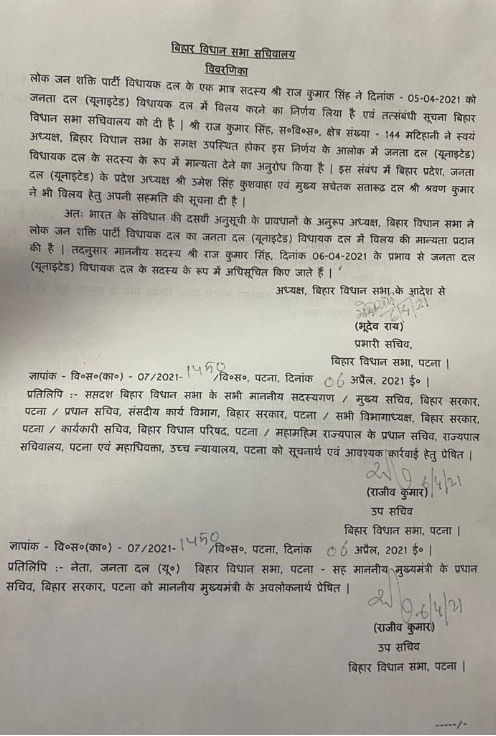 LJP's tussle with JD(U) in Bihar

An NDA ally since 2014, LJP decided to contest the 2020 Bihar Assembly polls separately owing to ideological differences with JD(U). During the election campaign, he repeatedly asserted that LJP and BJP will form the next government in Bihar. Reiterating his affection for the PM, the LJP president said that he was the PM's Hanuman. This set rumour mills abuzz about BJP's alleged tacit understanding with LJP to marginalise JD(U) within the alliance. Ultimately, the Bihar polls turned out to be a nail-biting contest with NDA emerging victorious in 125 seats as against that of 110 seats won by the Mahagatbandhan.

BJP, RJD, JD(U), Congress won 74, 75, 43 and 19 seats respectively. With 4 seats each, VIP and HAM (S) had a crucial role to play in the ruling alliance breaching the majority mark. Similarly, AIMIM made a huge mark in Bihar politics as 5 of its candidates were declared winners. While LJP managed to bag just one seat with a vote share of 5.66%, a closer look at its performance suggests that it foiled JD(U)'s chances of emerging as the single-largest party. As per the EC data, LJP secured more votes than the winning party's victory margin over JD(U) in the aforesaid 32 constituencies. This essentially implies that JD(U)'s chances of potentially winning these seats would have increased manifold if LJP remained a part of the NDA alliance in Bihar.