Condoling the demise of veteran Bollywood icon Dilip Kumar, PM Modi on Wednesday, tweeted that the 98-year-old actor will be remembered as a cinematic icon 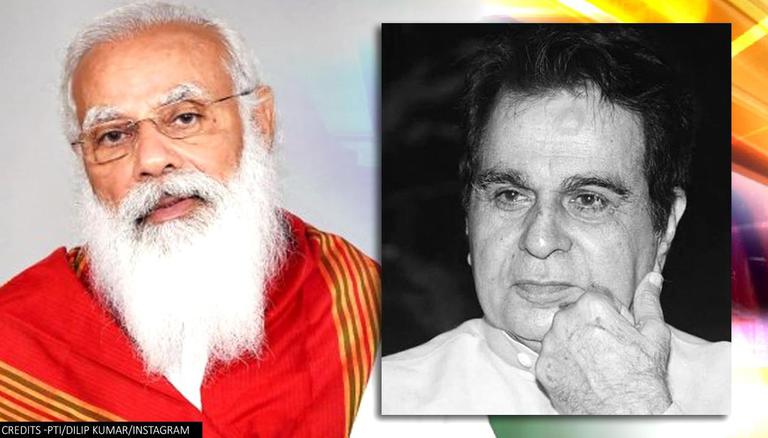 
Condoling the demise of veteran Bollywood icon Dilip Kumar, PM Narendra Modi on Wednesday, tweeted that the 98-year-old actor will be remembered as a cinematic legend. Lauding Kumar's unparalleled brilliance, the PM said that audiences across generations were enthralled. Stating that his passing away is a loss to our cultural world, the Prime Minister shared his condolences to Dilip Kumar's family, friends and fans. The Prime Minister has also spoken to Dilip Kumar's wife Saira Banu to express his condolences.

Modi: "loss to our cultural world"

Dilip Kumar Ji will be remembered as a cinematic legend. He was blessed with unparalleled brilliance, due to which audiences across generations were enthralled. His passing away is a loss to our cultural world. Condolences to his family, friends and innumerable admirers. RIP.

Legendary actor Dilip Kumar passed away in Mumbai on Wednesday. He was 98. The Padma Vibhushan recipient had been facing multiple health-issues for the past few weeks, being hospitalised numerous times for breathlessness and being treated upon for bilateral pleural effusion. The news was confirmed by Dr Jalil Parkar, the pulmonologist treating the actor at Mumbai's PD Hinduja Hospital.

Dr. Jalil Parkar issued a statement reading, "The doyen of Indian film industry Mr. Dilip Kumar breathed his last today at 7.30 AM at Khar Hinduja hospital after a long and protracted illness. May God bless his soul in heaven". Soon after, his family confirmed the same

Dilip Kumar had been admitted to the intensive care unit (ICU) of a Mumbai hospital, has shown improvement in his health, his wife Saira Banu said on Monday. The 98-year-old screen icon was admitted in suburban Khar-based Hinduja Hospital, a non-COVID-19 facility, last week to address age-related "medical issues" days after being discharged from the same hospital.  A tweet posted by Banu from the official Twitter account of Kumar on Monday asked his fans to pray for the actor so that he is discharged from the hospital "soon."

The Hindi cinema veteran was admitted to the Hinduja Hospital in June following episodes of breathlessness.  At the time, Kumar was diagnosed with bilateral pleural effusion -- a build-up of excess fluid between the layers of the pleura outside the lungs -- and underwent a successful pleural aspiration procedure. He was discharged after five days.

Dilip Kumar is considered among the greatest actors in the Indian film industry. Starting his career in 1944, he went on to feature in iconic films likes Mughal-e-Azaam, Devdas, Naya Daur, and Ram Aur Shyam, among others. His last big screen appearance was in the 1998 film Qila. He has been felicitated with numerous honours and awards, including the Padma Vibhushan and Dadasaheb Phalke Award by the Government of India.