The leaders of the ruling Maha Vikas Aghadi in Maharashtra hold a meeting at Mumbai's Trident Hotel to discuss the strategy for the RS polls. 
As all political parties in the run-up to the Rajya Sabha elections begin to hold their Members of Legislative Assembly (MLAs) safe, the leaders of the ruling Maha Vikas Aghadi in Maharashtra held a meeting at Mumbai's Trident Hotel to discuss the strategy for the polls. Republic Media Network has accessed visuals of the MVA leaders' show of strength. Heavyweights like Nationalist Congress Party Chief Sharad Pawar, Chief Minister and Shiv Sena Chief Uddhav Thackrey, Congress' veteran leader Mallikarjun Kharge, HK Patil were present at the meeting.

#BREAKING | Visuals accessed of MVA MLAs at Trident Hotel in Mumbai; Sharad Pawar, CM Uddhav Thackrey, HK Patil will be in present in the meeting ahead of the Rajya Sabha polls; Tune in #LIVE here - https://t.co/hBNv8QrX25 pic.twitter.com/phKDkHWuz2 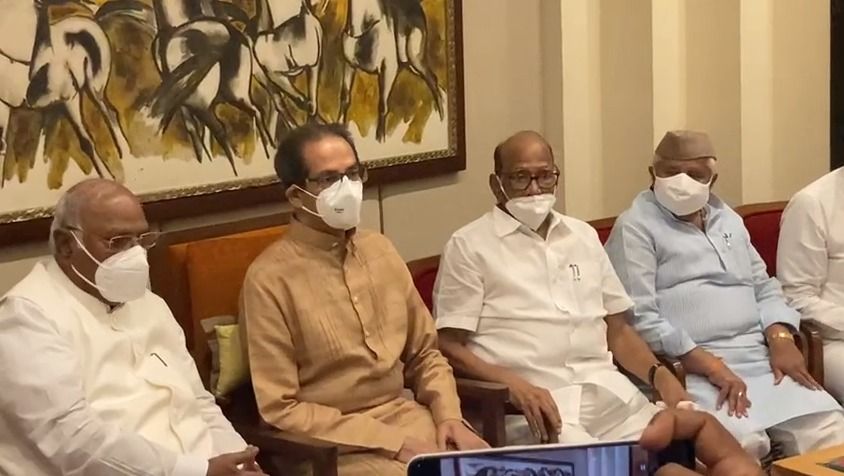 Meanwhile, just days ahead of the RS polls, Shiv Sena has decided to shift all its MLAs to Mumbai amid fears of horse-trading by the Opposition. The party has made arrangements to lodge them up at a hotel in south Mumbai till elections for the six Rajya Sabha seats conclude. All India Majlis-e-Ittehadul Muslimeen (AIMIM) supremo Asaduddin Owaisi has offered to support the MVA in defeating Bharatiya Janata Party in the RS polls.

Sources have informed that Congress and NCP are also preparing a strategy to keep all their MLAs as well as Independents and legislators of allied parties together to avoid the risk of cross-voting. In the state of Maharashtra, 6 seats are currently vacant due to the retirement of BJP's Piyush Goyal, Vinay Sahastrabuddhe, Congress' Vikas Mahatme, and P Chidambaram. The terms of NCP MP Praful Patel and Shiv Sena leader Sanjay Raut also end on June 10. Based on their current strength in the Assembly, Shiv Sena, NCP, and Congress are confident of winning one seat each, whereas BJP is poised to win two seats.

As seven candidates were going to contest for the six Rajya Sabha seats in Maharashtra, the BJP has fielded Union Commerce Minister Piyush Goyal, Anil Bonde, and ex-Member of Parliament Dhananjay Mahadik, while Shiv Sena has placed two candidates - Sanjay Raut and Sanjay Pawar. NCP has renominated Praful Patel, while Congress has Imran Pratapgarhi. The battle for the sixth seat is between BJP's Mahadik and Shiv Sena's Sanjay Pawar.