The Supreme Court will list a bunch of pleas filed by Shiv Sena pertaining to the political upheaval in Maharashtra after a few days. While the Eknath Shinde camp has moved the SC against the disqualification proceedings against them, the Uddhav Thackeray faction has challenged the formation of the Eknath Shinde-Devendra Fadnavis government and the subsequent proceedings. 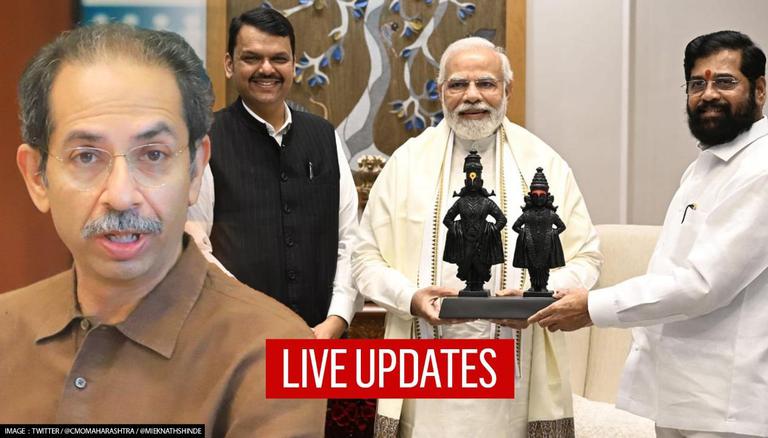 NCP's Jayant Patil said, "I don't see any possibility of MVA to go separate from Uddhav Thackrey. No, if Uddhav ji has supported Draupadi Murmu ji then it doesn't mean he is in NDA now. It is history if Shiv Sena that if any Shiv Sainik leaves party then he always comes winning that respective seat. Uddhav Thackrey ji is of soft nature and he will come back with more power. MVA is still intact. Subhash Desai's letter is signaling at making the same person cm again whom once removed and in Maharashtra you will see this happening."

Meanwhile, heavy rains continued to lash parts of Maharashtra, leading to the death of three persons in related incidents over the past 24 hours and the evacuation of 95 people from flooded places, the state government said on Tuesday.

"We will fully support Droupadi Murmu for the Presidential elections. All our MLAs will vote for her under the guidance of PM Narendra Modi," said Maharashtra CM Eknath Shinde

In a press conference, NCP spokesperson Mahesh Tapase said that Shiv Sena (Uddhav Faction) has not officially issued any statement declaring their support for Droupadi Murmu as the presidential candidate.

He said, "Uddhav ji has not yet officially declared support for Droupadi. There is rebellion in Shiv Sena. NCP and Congress are standing with Uddhav ji. We recognize Uddhav Thackeray faction as the real Shiv Sena."

On whether 12 Lok Sabha MPs will join his faction, Maharashtra CM Eknath Shinde remarked, "I don't know yet. But many people, I won't say thousands, which include office-bearers, workers and public representatives are in touch with us. People have faith in the state government because of our position on Balasaheb's ideology and the BJP-Shiv Sena alliance. The Deputy CM has handled the affairs of the state successfully as the CM for 5 years. Many people are in touch with us because they have faith that the state government will ensure the all-round development of the state and give justice to the common man."

High tide hits Marine Drive in Mumbai amid rainfall. Here are visuals from Gateway of India.

A key meeting of NCP has commenced at the YB Chavan Centre in Mumbai. NCP supremo Sharad Pawar and other key leaders are present in the meeting.

If Shiv Sena supports Mrs. Draupadi Murmu, will it be a historic decision of the party? Do you know why? Because earlier Balasaheb used to give orders, MPs used to follow them. This time it will happen that the MPs ordered, the party obeyed. This will be the height of the internal democracy of Shiv Sena."

MNS chief Raj Thackeray postponed a party convention that he was scheduled to address tomorrow. This decision was taken owing to the incessant rains lashing various parts of Maharashtra. 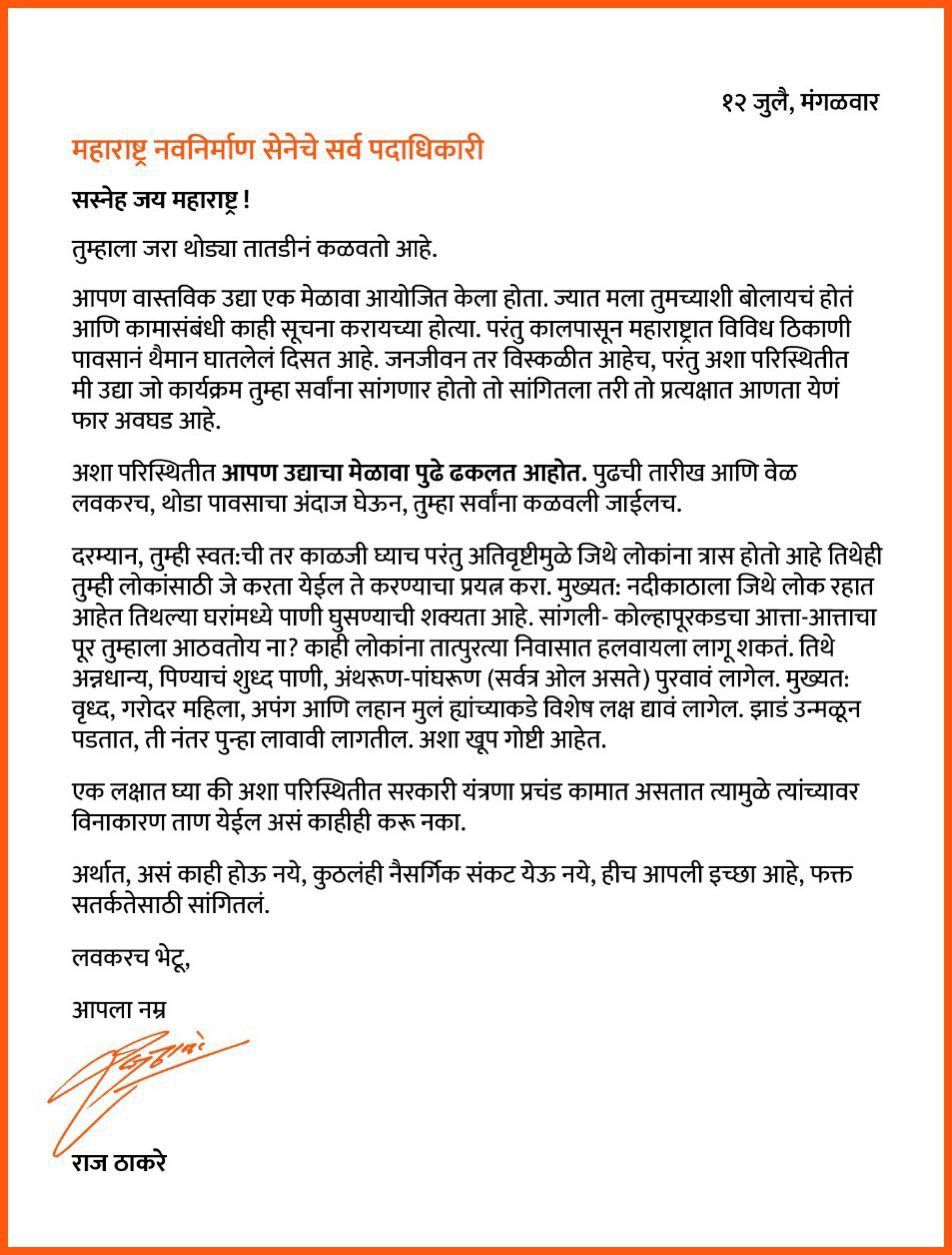 In a massive development, sources told Republic TV that Shiv Sena has decided to support NDA's presidential candidate Droupadi Murmu. This decision was taken in a meeting of Sena MPs chaired by party president Uddhav Thackeray on Monday. Thackeray will make an official announcement in this regard very soon.

As per the India Meteorological Department, Moderate to intense spells of rain is very likely to occur at isolated places in the districts of Mumbai, Palghar, Thane, Raigad, and Ghat areas of Pune and Satara, Nanded, Hingoli, Parbhani, Latur during the next 3-4 hours.

Shiv Sena workers and office-bearers in Aurangabad have started committing their loyalty to party president Uddhav Thackeray by signing bond papers and getting them notarized. A local leader said on Monday that they launched this drive "spontaneously" in view of the rebellion by Eknath Shinde and other MLAs against the Sena leadership. The Sena workers are pledging their loyalty to Uddhav Thackeray on bond papers, each valued at Rs 100, and getting them notarized.

A review meeting was held with Chief Minister Eknath Shinde at Gadchiroli District Collector's Office on July 11 regarding the flood situation in Gadchiroli and various measures being taken by the administration. Taking detailed information, appropriate instructions were given by the Chief Minister.

As many as 83 people have died in rain-related incidents in Maharashtra between June 1 and  July 10, the state disaster management authority said in a report on Monday. The report said 164 animals, too, have perished during the same period in rain-related incidents. Nashik district in North Maharashtra recorded the maximum deaths at 12 followed by Nagpur (four). These deaths were caused by incidents like floods, lightning strikes, landslides, falling of trees and collapse of structures, among others, it said.

Chandrapur, Parbhani, Osmanabad, Hingoli, Aurangabad, Kolhapur, Sangli, Solapur, Raigad, Thane and Mumbai did not record any fatality since the beginning of the monsoon last month, the report said. Several parts of the state, including Mumbai and its adjoining areas, witnessed heavy rainfall between June 1 and July 10.

Rebel Shiv Sena MLA Sada Sarvankar tendered his resignation from the post of Department head (Vibhaag Pramukh). Along with Sarvankar, other Shiv Sainiks resigned from their post as Branch heads (Shakha Pramukh). Their resignation was sent to Shiv Sena chief Uddhav Thackeray. 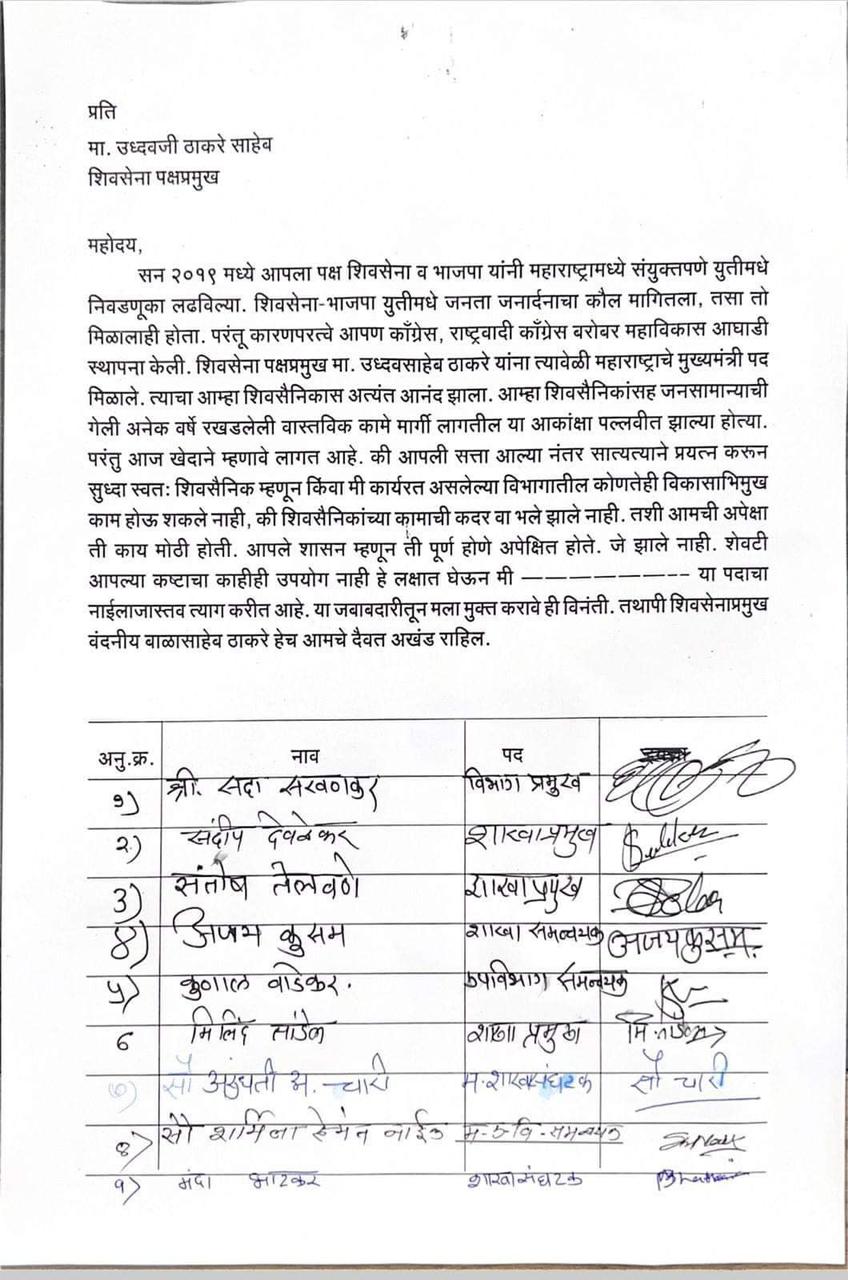 The Indian Metrological Department issued a red alert for Kolhapur, Palghar, Nashik, Pune, and Ratnagiri districts for heavy rains till July 14. An orange alert has been issued for Mumbai for the next 3 days.

21:31 IST, July 11th 2022
One held by Mumbai Police for threatening Mumbai girl for posting in favour of Nupur Sharma

Mumbai police arrested a person accused of threatening a Mumbai girl who posted in favour of Nupur Sharma from Budgam in J&K. He was produced in court today.

With the Supreme Court hearing on OBC quota in local bodies scheduled for July 12 (Tuesday), the five-member commission handed over its report to Chief Secretary Manukumar Shrivastava on Saturday. All political parties in the state have opposed conducting the polls on August 18 without the OBC quota.

Shiv Sena president Uddhav Thackeray has written a letter to 15 MLAs who continue to back him despite a rebellion in the party,  lauding them for their "loyalty" towards the 56-year-old organisation and not falling prey to any inducements or threats to switch sides.

In the letter dated July 6, Thackeray, who resigned as the chief minister of Maharashtra late last month following the rebellion,  said Sena founder late Bal Thackeray had always preached loyalty towards the party and that legislators who stayed back with him followed his teachings.

As a Shiv Sena MLA, you diligently followed his (Bal Thackeray's) teachings of loyalty. You did not fall prey to threats or inducements and remained loyal to the Shiv Sena. Maharashtra is proud of your stand and this will also strengthen the party, the letter said.

Gajanan Kirtikar, Shiv Sena MP, in a brief conversation with the media after the party meeting, said, "Droupadi Murmu is an NDA candidate but she belongs to the tribal community and is a woman. We should give her our support - this was the demand by all MPs (of the party). Uddhav Ji told us that he will tell us his decision in a day or two."

Republic learnt from sources that the 10 of the 22 Shiv Sena MPs who met supremo Uddhav Thackeray have demanded that the party supports Draupadi Murmu, the NDA candidate, in the Presidential elections scheduled for July 18.

"To review the flood situation, along with CM Eknath Shinde, we have left from Mumbai, for visiting Gadchiroli district," tweets Maharashtra's Deputy CM Devendra Fadnavis.

Deepak Kesarkar, the spokesperson of the breakaway faction of Shiv Sena, said that the rebel MLAs were ready to come back if the decision to leave NCP-Congress would've been made. Everyone in the party, including the MPs wanted an alliance with the BJP,' he said on a day, Uddhav Thackeray received another jolt as only 10 of 22 Shiv Sena parliamentarians attended the meeting called by him.