On Thursday, West Bengal CM Mamata Banerjee claimed that she was "insulted" by not being allowed to speak at the meeting with PM Modi on COVID management. 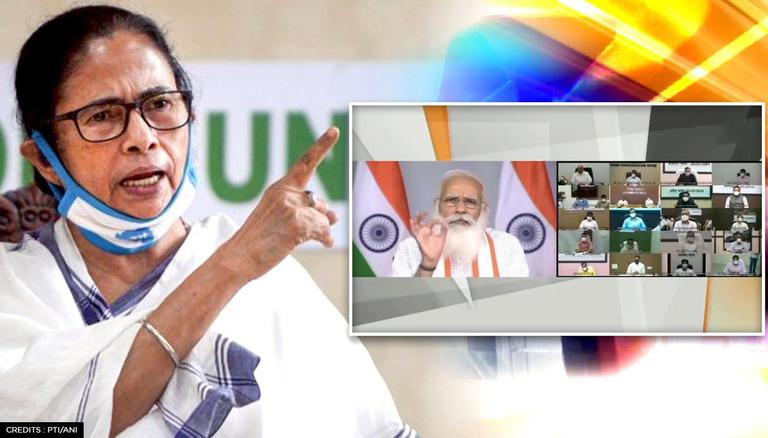 
In an explosive charge on Thursday, West Bengal CM Mamata Banerjee claimed that she was "insulted" by not being allowed to speak at the meeting with PM Modi. She was addressing a press briefing after participating in a meeting chaired by the PM pertaining to COVID-19 management. Officials from the Health Ministry and 54 districts including North and South 24 Parganas, Kolkata, Paschim Bardhaman, Birbhum, Nadia, Howrah, Hoogly and East Midnapore also attended the virtual meeting. The other attendees were CMs of 10 states- Chhattisgarh, Haryana, Kerala, Maharashtra, Odisha, Puducherry, Rajasthan, Uttar Pradesh, West Bengal and Andhra Pradesh.

Contending that only UP CM Yogi Adityanath got a chance to express his views, Banerjee called upon other Chief Ministers to lodge a protest. Alleging that the Centre is not supplying an adequate amount of oxygen to the state, she also flagged the shortage of Remdesivir in the market. Slamming the PM for purported shying away from two-way communication, the TMC supremo claimed that the states were not asked anything about COVID-19 vaccines, black fungus and other coronavirus-related issues. Reiterating the contention that COVID-19 spread in WB owing to the eight-phase Assembly polls, she also questioned the PM on whether he had dispatched a Central team to UP where dead bodies have been seen floating in rivers.

WB CM Mamata Banerjee remarked, "We were ready with all the documents. But we were not allowed to speak a single line. We all the Chief Ministers are feeling insulted. We were sitting like puppets. They never asked us anything related to vaccines, black fungus, and other issues related to COVID."

"Has the Modi government sent any central team to Uttar Pradesh, where dead bodies are floating into the Ganges? I have written a letter to PM for providing free universal vaccines. he did not reply. PM is insecure as he did not allow to speak CMs in this meeting," she added.

At present, there are 31,29,878 active novel coronavirus cases in India while 2,23,55,440 patients have been discharged and 2,87,122 deaths have been reported. During his address to the officials of the aforesaid 10 days, PM Modi batted for new strategies and solutions which can be possibly replicated in other parts of the country. He mentioned that  Health Ministry is providing information to the states regarding vaccines for 15 days which will help to manage the timelines for inoculation. Highlighting the need to stop vaccine wastage, he emphasised that wasting even a single dose means not able to give a shield to a life.

Interaction with District Officials on the COVID-19 situation.
https://t.co/k2RtKzIFHY