West Bengal CM Mamata Banerjee lashed out at BJP and condemned its 'apathy' towards protesting farmers, referring to the Lakhimpur Kheri incident in UP 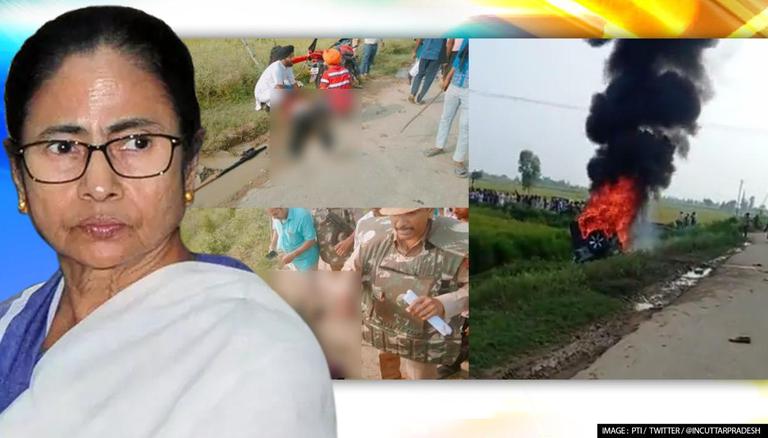 
West Bengal CM Mamata Banerjee lashed out at BJP and condemned its 'apathy' towards protesting farmers, referring to the Lakhimpur Kheri incident in Uttar Pradesh. Violence allegedly broke out after two SUVs reportedly ran over a group of anti-farm law demonstrators against the visit of Deputy Chief Minister Keshav Prasad Maurya at Tikonia-Banbirpur bypass road. As per reports, the vehicle was allegedly owned by MoS Ajay Mishra's son Ashish. The farmers had assembled there to oppose Maurya's visit to Banbirpur, the native village of Union minister of state for Home Khiri MP Ajay Kumar Mishra.

Taking to Twitter, CM Banerjee denounced the national ruling party and stated that a member of All India Trinamool Congress (AITC) will visit the bereaved families of the deceased. The TMC supremo shared, "I strongly condemn the barbaric incident in Lakhimpur Kheri. The apathy of BJP India towards our farmer brethren pains me deeply. A delegation of 5 AITC MPs will be visiting the families of the victims tomorrow. Our farmers will always have our unconditional support."

I strongly condemn the barbaric incident in Lakhimpur Kheri. The apathy of @BJP4India towards our farmer brethren pains me deeply.

A delegation of 5 @AITCofficial MPs will be visiting the families of the victims tomorrow. Our farmers will always have our unconditional support.

Reports suggest that six people have been killed in the mishap, while four of the dead were in the car, the other two were farmers staging protests. Agitated protesters forcibly stopped the vehicles and set them on fire while thrashed the passengers seated too. Ruckus ensued in the Tikunia area of Kheri after the incident took place in the noon and subsequently, CM Yogi Adityanath's scheduled trip was cancelled as he took off for Lucknow. Visuals accessed by Republic TV indicated heavily armed forces of the UP Police who are deployed to monitor and take hold of the situation while farmers continue to protest.

Infuriated farmers in Lakhimpur Kheri, who had taken to the streets to protest against the contentious farm laws, retaliated by setting ablaze vehicles on the road after allegedly the minister's son's car ran over one of them. The farmers have accused the BJP leader's convoy of assaulting and causing hurt to a protesting section of farmers with vehicles which left several injured and two persons with serious casualties. Multiple news agencies complained their journalists and correspondents have sustained injuries too. The farmers assembled in the area to rebuke the Deputy CM's visit to Banbirpur which is the native village of the Union Minister, Mishra.

Meanwhile, in view of the accident, Deputy CM Maurya's visit to Banbirpur village has been called off on the account of security issues. Further, Samyukta Kisan Morcha has said that the Lakhimpur Kheri incident should be probed by a sitting judge of the Supreme Court and not under the shield of the Uttar Pradesh administration.

"We demand that Union Minister of State for Home and Khiri MP Ajay Kumar Mishra be immediately dismissed from his post. A case under section 302 (punishment for murder) of the IPC should be registered against the minister's son and other goons," farmer leaders Yogendra Yadav and Darshan Pal Singh said at a virtual press conference.