BJP MP Maneka Gandhi who often stands up for animal rights is being criticized after her alleged audio clip abusing a veterinary doctor over the amputation of a dog's leg went viral. The BJP MP was allegedly heard misbehaving with and abusing the doctor during a telephonic conversation after which #BoycottManekaGandhi posts started doing rounds on social media. Protesting against the former union minister, the Indian Veterinary Association (IVA) has written a letter to Prime Minister Narendra Modi seeking strict action.

In the audio clip, she was talking about the complaint that she received from a dog owner over the amputation of a dog's leg. She accused the vet of cutting off the leg, claiming amputation was not needed, and raised a question on the doctor's degree. She further used some abusive Hindi words for the doctor and threatened to revoke his license. Maneka ordered him to immediately treat the dog and warned that if it dies the doctor will have to face consequences.

IVA wrote a letter to PM Modi stating that the association is protesting against animal rights activist and BJP MP Maneka Gandhi for allegedly misbehaving with and threatening a doctor. The IVA requested Prime Minister to take cognizance of the situation so that the image of parliamentarian in the eyes of common people is not dented in the society.

"It is a matter of grave concern that Smt Maneka Gandhi, Honourable MP, Lok Sabha, habitually and repeatedly threatens veterinarians claiming settlements (audio clip attached). In the earlier instance, we, at Indian Veterinary Association, had requested her to refrain from using disgraceful and derogatory comments about Veterinary professions like first-generation educated, etc. The Indian Veterinary Council Act 1984 is in place to look after any professional misconduct by veterinary professionals. We fail to understand how an MP can straightforward pass the rule of Law and without any investigation under the act outright blames a vet using abusive language. The language and threat used are unparliamentary and are sure to malign the face of the government. The audio clip is not only graceful for the Veterinarians but for the parliamentary system by a parliamentarian herself," IVA letter read. 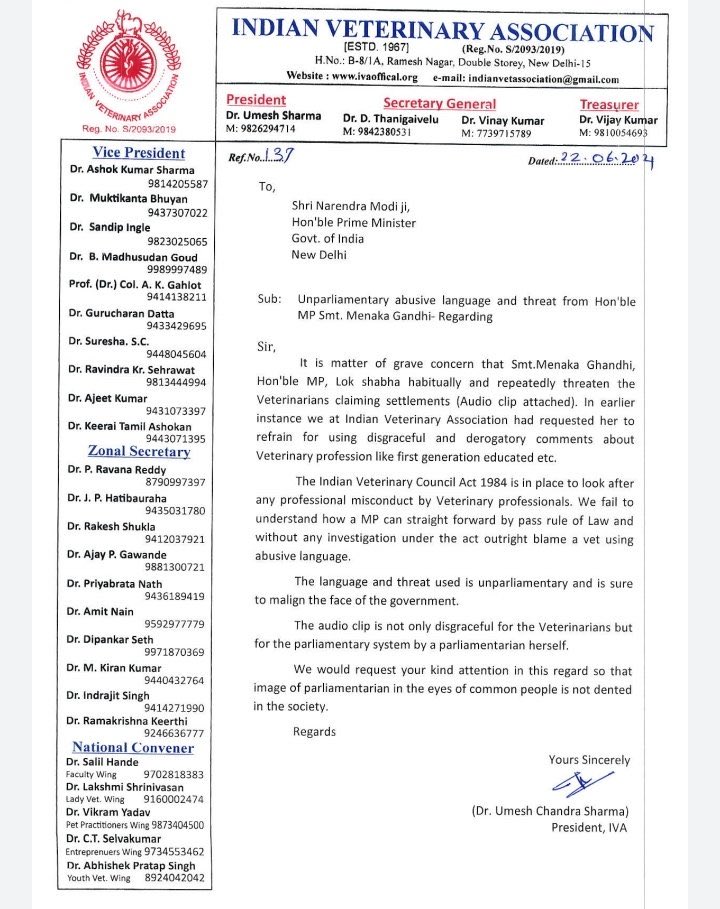 Addressing Veterinarians, IVA released another notice and called for a protest across the country on Wednesday. The association urged doctors to wear a black band in a sign of protest against the BJP MP and termed it as a black day.

After the alleged audio went viral, furious Netizens started a #BoycottManekaGandhi trend seeking her apology. Taking to Twitter, Filmmaker Ashoke Pandit shared the audio and said, "It’s high time that this arrogant & abusive politician #MenakaGandhi should b sacked from d party & all powers should be taken away from her. She needs immediate medical help. I know many innocent dog lovers being humiliated by her [sic]". 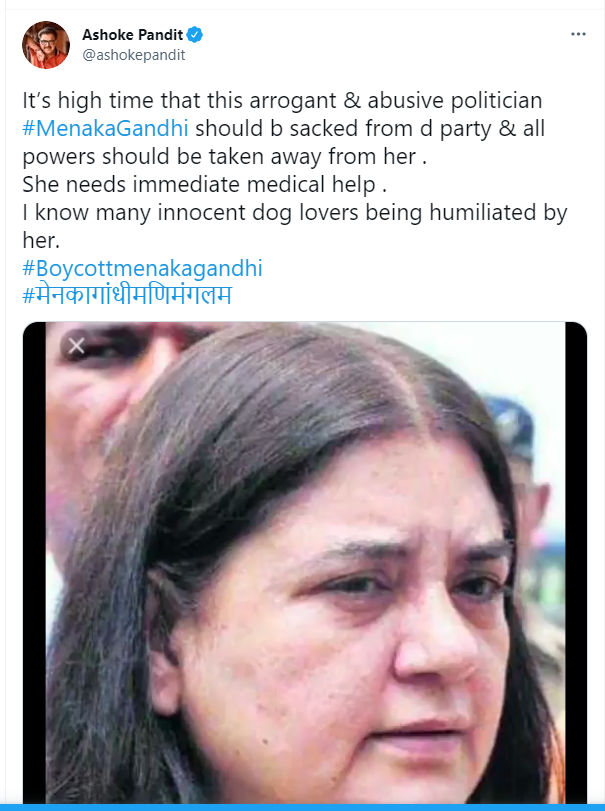