In a 5-point suggestion later, Manmohan Singh advised PM Modi to ramp up the immunization drive and publicize the details of the vaccine supplies


A day after the Congress Working Committee's (CWC) meeting over the COVID-19 situation across the country, former Prime Minister Manmohan Singh has written to PM Narendra Modi suggesting measures to curb the second Coronavirus wave hurting India's battle against the virus. In a 5-point suggestion later, the former Prime Minister has advised PM Modi to ramp up the immunization drive and publicize the details of the vaccine supplies and the number of doses in transit. The former Prime Minister's suggestion to publicize the details of vaccine supplies comes amidst the claims of vaccine shortages by the non-BJP ruled states. However, Union Health Minister Dr Harsh Vardhan has shunned all such reports and assured that there is no vaccine shortage across the country.

Citing the difficulties faced by people over the past year since the Coronavirus outbreak in 2020, Manmohan Singh highlighted that apart from the other things needed to fight the pandemic, ramping up the vaccination drive is of utmost priority.

"First, the government should publicise what are the firm orders for doses placed on different vaccine producers and accepted for delivery over the next six months.  If we want to vaccinate a target number in this period, we should place enough orders in advance so that producers can adhere to an agreed schedule of supply," Manmohan Singh wrote in his letter.

Notably, the former Prime Minister has also urged the NDA government at the Centre to indicate how the supply of vaccine doses will be distributed across states 'based on a transparent supply'. Suggesting that the Centre should retain 10 per cent of the jabs for emergency needs, Singh said that the states should have a clear signal of 'likely availability so that they can plan their roll out'.

"Third, states should be given some flexibility to define categories of frontline workers who can be vaccinated even if they are below 45 years of age," Manmohan Singh wrote in his letter to PM Modi.

The former Prime Minister, who was at the Centre in the UPA regime from 2004 to 2014, has also suggested PM Modi to tweak the intellectual property laws to allow other firms to manufacture COVID-19 vaccines. Highlighting that the government must support vaccine producers to expand the manufacturing facilities, Singh asserted that the government should 'invoke compulsory licensing provisions' to allow several companies to manufacture COVID vaccines under a license as it was done in case of the medicines to tackle HIV/AIDS disease.

"Fifth, since domestic supplies are limited, any vaccine that has been cleared for use by credible authorities such as the European Medical Agency or the USFDA, should be allowed to be imported without insisting on domestic bridging trials. We are facing an unprecedented emergency and, I understand, experts are of the view that this relaxation is justified in an emergency," Manmohan Singh added in his letter. 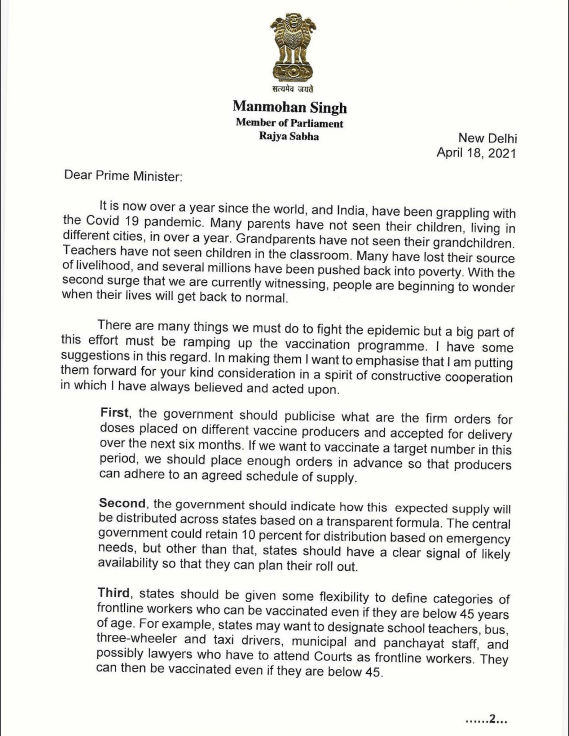 Sonia Gandhi hits out at Centre

Chairing a meeting of the Congress Working Committee (CWC), party chief Sonia Gandhi said that there exists 'gross unpreparedness' and 'avoidable adhocism' on the part of the Central government in its ability to foresee and manage the COVID-19 crisis. The interim President of Congress huddled up with the Chief Ministers of Congress-ruled states and states where the party is in an alliance. The virtual meeting was held to assess the COVID-19 situation in respective states.

Sonia Gandhi warned that few states are left with only a few days of vaccine, no oxygen or ventilators. She urged the Central government to reduce age limits on vaccination and suggested immunisation of 25-year-olds too. The Congress leader opined that the Central government must provide monthly income support because the economic activity will be restricted again amid strict lockdown and curfews in various states.