Manoj Tiwari On Shaheen Bagh Protests: '39 Days Have Passed, Is This Justified?'

Amidst the indefinite protests at Shaheen Bagh, Delhi BJP leader Manoj Tiwari tweeted to express his dismay over the protests asking if this was 'justified?'

Amidst the indefinite protests at Shaheen Bagh, Delhi BJP leader Manoj Tiwari tweeted to express his dismay over the protests asking AAP Chief Arvind Kejriwal and Congress leader Rahul Gandhi if this was 'justified.' Thousands of people, including women and children, are protesting for over a month at Shaheen Bagh and nearby Jamia Millia Islamia to oppose the Citizenship Amendment Act protests (CAA) and the National Register (NRC).

Recently RepublicTV also conducted a sting operation to expose the hand of the Left and the Congress in fueling the protests at Shaheen Bagh. Tweeting on this Manoj Tiwari said,

"39 days have passed. Due to Shaheen Bagh, traffic has stalled, millions of people are stressed, children are wasting 2–2 hours on the roads even during the time of examination.  Problems for office goers, loss to traders. Are they justified?" said Manoj Tiwari.

Meanwhile, the Delhi police on Monday appealed to the Shaheen Bagh protestors to clear Road No.13A once again. Revealing that many complaints had been received about children facing difficulty in reaching their schools, the police said parents were anxious because of the upcoming Board examinations. Delhi Police further observed that daily commuters and residents were also being inconvenienced due to the protests.

Recently BJP IT Cell Chief Amit Malviya also expressed discontent over the protests and stated that hundreds of daily commuters, school children, office goers, patients, and businesses are suffering every day because of the ongoing anti-CAA protests at Shaheen Bagh. Furthermore, he also accused the Congress and Aam Admi Party of holding Delhi to ransom. 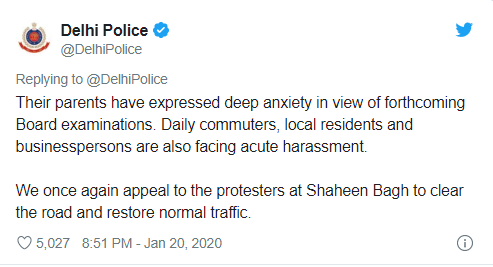