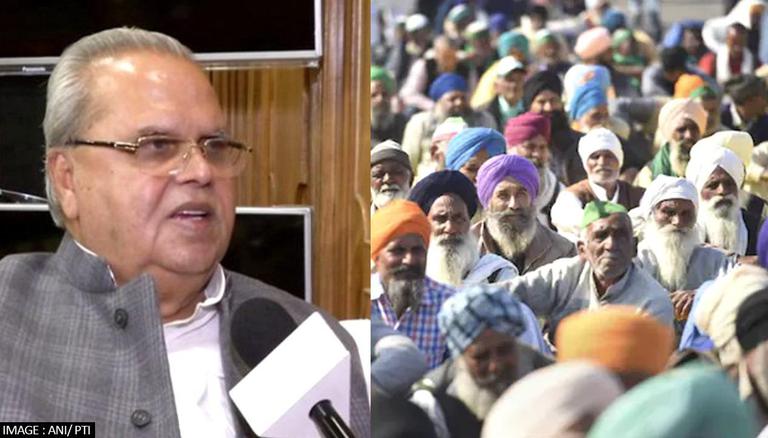 
Backing the farmers' protest again, Meghalaya Governor Satya Pal Malik on Sunday, urged the government to guarantee MSP via legislation and resolve the issue. He questioned the government's hesitancy in doing so adding that the farmers will compromise for no less. Farmers have vowed that they will not stop protesting till the three laws are rolled back.

Malik: 'Why not guarantee MSP via law?'

If govt (Centre) provide MSP guarantee through a law then it can be resolved (farmers' agitation against 3 farm laws). There's only one thing so why are you (Centre) not fulfilling it? They (farmers) won't compromise on less than MSP: Governor of Meghalaya Satya Pal Malik (17.10) pic.twitter.com/oSLze6YtlN

This is not the first time that Malik has spoken against the Centre. Last year, he had backed the farmers' protests urging the Centre to start talks with them. Warning that a prolonged protest may end in political assassinations, he said, "If the protest continues like this. then in the long term, BJP will lose out in western UP, Rajasthan and Haryana". Lamenting that he could not bear to see the plight of the farmers, he said that he was unafraid to speak his mind. "If the government thinks I am harming them then I will step aside," he added.

Malik said, “None of the laws are in favour of farmers. Wherever one goes, there is a lathi-charge. I belong to a farmer’s family. Hence, I can understand their problems. I will go to any extent to solve the problems of farmers"

Malik was dogged with controversies since 2018 when he dissolved the Jammu-Kashmir assembly citing extensive horse-trading, the impossibility of forming a stable government after BJP pulled out of the Mehbooba Mufti government. Later, he oversaw the bifurcation of J&K and the revocation of Article 370. But he was later transferred to Goa as the Governor, while Girish Chandra Murmu took his place. In Goa too, Malik ran into trouble after criticising the Pramod Sawant govt and was transferred to Meghalaya as Governor.

Farmers have been protesting against the Centre's Farm Laws for nearly a year at the Delhi's borders - Tikri, Singhu and Ghazipur, demanding a total repeal by Parliament. The protest peaked when farmers broke down barricades, entered Delhi, clashing with police and hoisted the SKM flag at the Red Flag on Republic Day. Talks between Centre and farmers stalled after 13 rounds, while farmers protested against the Farm Bills at Jantar Mantar during the entire Monsoon parliament session, passing a no-confidence motion against the Centre at the Kisan Sansad. The SC-appointed panel has submitted its report to the apex court after holding several rounds of talks with many farmer unions, trade unions, manufacturers, food processing units etc.