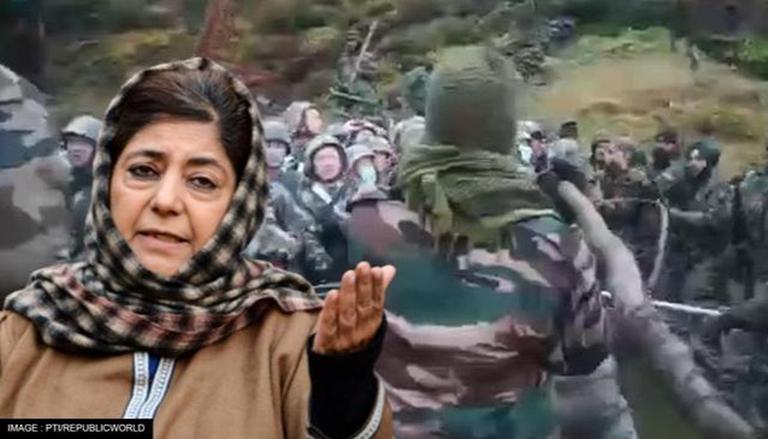 
Days after troops of India and China clashed in the Tawang region of Arunachal Pradesh, People's Democratic Party chief Mehbooba Mufti sparked a controversy. Reacting to the clash in the border region, Mufti claimed that parts of India, including Ladakh, have been captured by China, and she further cited the statement of a Member of Parliament from the Bharatiya Janata Party (BJP). She claimed that BJP has done 'nothing' about it.

"Our soldiers are beaten up, they are not allowed to retaliate. This is a sorry state of affairs," she said, at a time when an undated video is widely doing the rounds on social media. In the two-minute-long video, Indian troops posted at a high altitude at the LAC are seen charging toward the transgressing People's Liberation Army (PLA) soldiers, who were trying to illegally cross the border.

Indian and Chinese troops engaged in a face-off in the Tawang sector of Arunachal Pradesh on December 9. The face-off led to minor injuries to a few personnel from both sides. Both sides immediately disengaged from the area.

People's Liberation Army (PLA) troops on December 9 contacted the LAC in the Tawang Sector of Arunachal Pradesh, which was contested by Indian troops in a firm and resolute manner.

Addressing the Parliament, Defence Minister Rajnath Singh said, "The Chinese side was asked to refrain from such actions and maintain peace and tranquility along the border. The issue has also been taken up with the Chinese side through diplomatic channels."

READ | Tibetans express anger over India-China faceoff in Tawang, ‘They will not stop doing this'

He added, "I would like to assure this House, that our Forces are committed to protecting our territorial integrity and will continue to thwart any attempt made on it. I am confident that this entire House will stand united in supporting our soldiers in their brave effort."