Milind Deora has extended his support to DK Shivakumar and reached outside the Karnataka rebel MLAs Mumbai hotel to meet DK Shivakumar.

The state of Karnataka is in midst of political turmoil with the coalition government of JD(S) Congress at the verge of falling. Even as there is crisis in the national level within the Congress after Rahul Gandhi resigned and an internal tussle in Maharashtra Congress between Milind Deora and Sanjay Nirupam, Deora has extended his support to DK Shivakumar and reached the hotel to meet DK Shivakumar.

Taking to Twitter Deora said that he has spoken to Shivakumar and assured that the local Congress leaders and workers are available to lend support. He also urged Karnataka MLAs to return to Bengaluru and resolved the matter constitutionally. He further alleged that BJP is sponsoring the entire situation and called it a misuse of power.

I have spoken to @DKShivakumar ji & assured him that local Congress leaders & workers are available to lend any support.

I urge the Karnataka MLAs to return to Bengaluru & resolve the matter constitutionally. BJP is sponsoring this sabotage by misusing its power in Maharashtra

Congress leader DK Shivakumar reached the Renaissance hotel Mumbai on July 10, where the rebel MLAs are living currently amid heavy police presence. Protestors who are supporters of rebel MLA Narayan Gowda gathered and shouted 'Shivakumar, go back.'  Shivakumar was escorted back by the police. The police also stopped him from entering the hotel.

Speaking to media, he had said: "I will contact them. I have been invited by them who are inside the room. Those who are inside they gave us a call and said rescue us. My friends are staying here. There has been a small problem, we've to hold negotiations. We can't go for a divorce immediately. There is no question of threatening, we love and respect each other... We have booked a room there. How can I be a threat to them? I don't have weapons, I only have a heart. I am here to exchange heart with my friends. They are not allowing me outside. Police is not allowing due to security threat."

Meanwhile, Congress veteran Mani Shankar Aiyar also put his weight behind DK Shivakumar, he said that he backs the latter for the post of next president after seeing his courage. 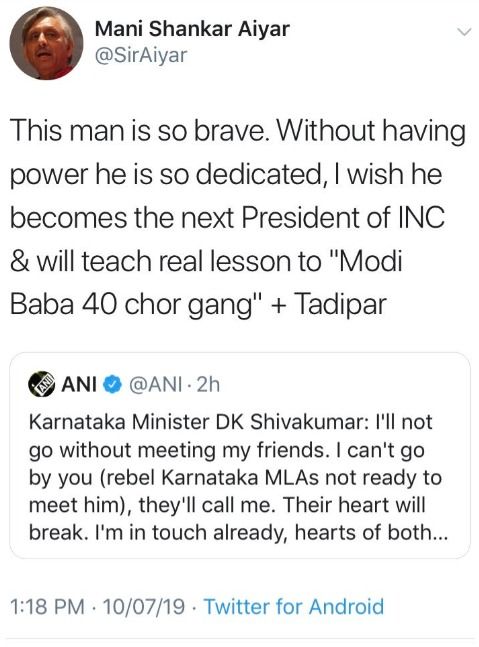 On Saturday, 13 Congress-JD(S) MLAs had resigned including 1 Independent. The JD(S)-Congress coalition’s total strength came down to 117 after (Congress-78, JD(S)-37, BSP-1 and Independents-1) after Nagesh withdrew his support from the government, besides the Speaker.

If the resignations of the 13 Congress-JD(S) MLAs are accepted by the Speaker, the Congress-JD(S) coalition’s numbers will come down to 104, besides the vote of the Speaker. If the Speaker accepts the 13 resignations, the Karnataka Legislative Assembly will come down to 212 out of 225, which will leave the half-way mark to 106. As the saffron party has 107 MLAs in its support now, it can call a trust vote and form a government in the state.

While the state of Karnataka is amid political turmoil after a total of 14 MLAs resigned and the JD(S) - Congress coalition under the threat of falling, and Chief Minister HD Kumaraswamy and Congress leader, former Chief Minister Siddaramaiah is trying hard to keep the flock together and are issuing statement that can act as an assuage to the condition of coalition in the state. With Congress chief Rahul Gandhi publically offering his resignation and no clarity on the next party president and internal tussle in the party between members like Milind Deora-Sanjay Nirupam,etc, Karnataka political crisis comes as a huge setback for the Grand-old party.