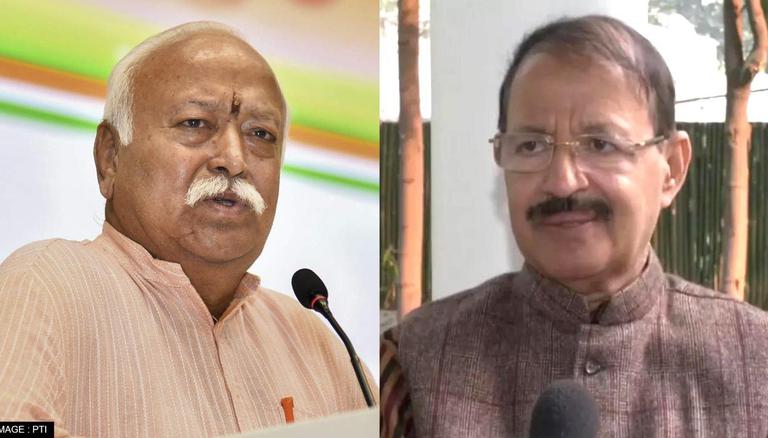 
Congress leader Rashid Alvi questioned Rashtriya Swayamsevak Sangh's (RSS) chief Mohan Bhagwat's statements in connection to the ongoing Gyanvapi row. Alvi asserted that the latter's statement 'Don't look for Shivling in every Masjid' was pointless if that message was not delivered to the Bharatiya Janata Party and RSS workers. The leaders of organisations are making strong statements in favour of the Hindu side in the mosque vs temple land dispute, amid claims that a Shivling was found on the premises of the mosque.

"Mohan Bhagwat should explain the facts to his leaders. Every spokesperson of the BJP on TV debates is advocating the presence of a Shivling in the Gyanvapi Masjid. Doesn't Mohan Bhagwat know about this? If he knows, then he should explain it to the leaders of the BJP and RSS. Otherwise nobody will believe you," Alvi was quoted as saying.

'Why look for a Shivling in every masjid?': RSS chief

RSS Head Mohan Bhagwat amid the ongoing Gyanvapi Mosque legal dispute and a string of similar cases where Muslims monuments are being claimed as Hindu places of worship, said it is pointless to look for Shivling in every Mosque and ratchet up a debate. He further added the matter is ongoing; that history cannot be changed and that neither today's Hindus nor today's Muslims created it.

He was addressing a concluding ceremony of the Rashtriya Swayamsevak Sangh's third year officer training camp in Nagpur. Bhagwat said, "Gyanvapi matter is ongoing. Can't change history. Neither today's Hindus nor today's Muslims created it. It happened at that time. Islam came from outside via attackers. In the attacks, Devasthans were demolished to exhaust the morale of those who wanted India's independence."

The Hindus had a special affection towards some places and a narrative was generated about it but a new matter should not crop up on a daily basis, the RSS chief added.

"We had special devotion towards some places & we spoke about them but we shouldn't bring out a new matter daily. Why should we escalate the dispute? We have devotion towards Gyanvapi and doing something as per that, it's alright. But why look for a Shivling in every masjid?"

The Supreme Court on May 20 transferred the Gyanvapi Mosque - Shringar Gauri case from the Varanasi Civil judge to the district judge looking at the sensitivity of the issue. It's important to note that a group of five women has filed a case seeking year-long access to the worship of the Shringar Gauri Devi at the Gyanvapi Mosque premises. The worship is currently allowed only once a year.

Other than this, there was also the Krishna Janmabhoomi dispute, in which the Mathura district court accepted the plea seeking the removal of the Shahi Idgah Mosque from the premises that it shares with the Katra Keshav Dev Temple.

Another claim was regarding the Taj Mahal, where the Lucknow bench of the Allahabad HC dismissed the plea to open the 22 closed doors of the monument. BJP leader Rajneesh Singh, the petitioner, sought direction to the ASI to examine locked rooms of the Taj Mahal to check for the presence of Hindu idols.

READ | Amid Gyanvapi row, RSS chief Mohan Bhagwat asks 'Why look for Shivling in every Masjid?'