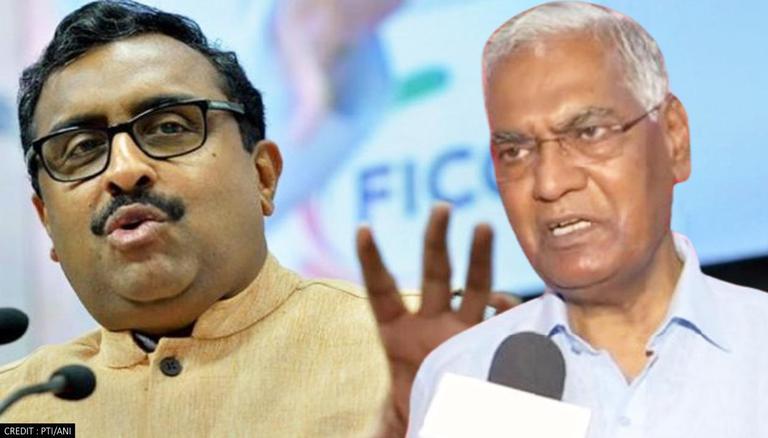 
CPI general secretary D Raja on Friday called RSS ideology communal and alleged that it attempts to re-interpret history. His remarks were an apparent dig at the statement of former BJP national general secretary Ram Madhav that Kerala's ruling Left government was trying to whitewash the Moplah rebellion.

"One can say such a thing about RSS also. What is the RSS mindset? It is also a communal fascist mindset that tries to re-interpret the entire history, rewrites the entire history, and tries to redefine the nationhood of this country. As far Moplah revolt is concern it is against feudal lords against British rulers that is why those people were sent to cellular prisons, Ram Madhav should know that," Raja said, reported ANI.

Calling RSS's ideology communal, divisive and fascist, Raja said the Communist Party of India has been making the supreme sacrifices for the country's Independence. "He (Madhav) must explain to this country what is the mindset of RSS? Why RSS did not have any role in the freedom movement of our country?" the CPI leader asked.

Madhav on Thursday said that the Moplah rebellion in Kerala was one of the first manifestations of the Talibani mindset and the Left government was allegedly trying to whitewash it by observing it as a communist revolution. Coincidentally, this political row happens as the Moplah riots complete 100 years on August 20, 2021.

Speaking at an event held at Kozhikode in remembrance of the Mapilla (Moplah) Riots Martyrs, Madhav said that atrocities committed then were not publicised due to no modern means of communications in 1921.

As the brutalities committed during that people was not known to everyone, the Left government, was trying to conceal what happened and was celebrating it as a Communist agitation against the British and the bourgeois or zamindars by making movies that showcase the rebellion's leaders as "heroes", Madhav contended.

“They want to celebrate it in a totally different manner. They want movies to be made on the ‘heroism’ of the rebellion leaders. The Leftist liberal cabal is trying to whitewash it (Moplah rebellion),” he alleged and said “that world over the Left is known for distorting the facts. It is in their genes.”