Congress leader Digvijaya Singh tweeted a controversial photo that he claimed was taken during violence in Madhya Pradesh's Khargone on Ram Navami. 
Former Madhya Pradesh Chief Minister and senior Congress leader Digvijaya Singh landed in trouble after sharing a controversial post on social media that turned out to be fake. On Tuesday, Singh took to Twitter to post a photo that he claimed was taken during the communal violence in Madhya Pradesh's Khargone on Ram Navami. The Congress leader later deleted the tweet, following severe backlash from BJP leaders, including Chief Minister Shivraj Singh Chouhan, who called it "a conspiracy to spread religious frenzy in the state."

In the photo shared by the Congress leader, some youths were seen climbing up a mosque and planting saffron flags there. It turned out to be an old image from Bihar, that resurfaced during the violence in MP on Sunday.

Tweeting the photo, the Congres leader wrote, "Is it appropriate to hoist saffron flag on a mosque? Did the Khargone administration allow this procession to carry weapons? Will bulldozers run at the homes of all those who throw stones, irrespective of religion?" (Translated from Hindi) 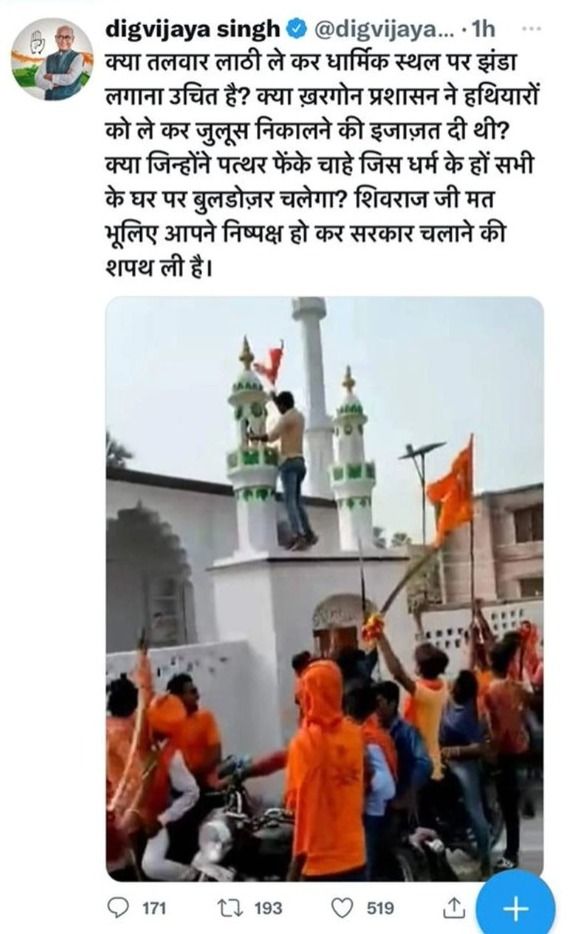 Pointing out that the photo was fake, CM Chouhan accused Digvijaya Singh of fuelling communal tensions in the state. Fact-checking the Congress leader's tweet, the CM wrote: "Digvijaya Singh has tweeted a photo of a youth hoisting a saffron flag at a religious place, he is not from Madhya Pradesh. This tweet is a conspiracy to spread religious frenzy in the state and to ignite communal riots in the state. It is a conspiracy that will not be tolerated."

What happened in Khargone on Ram Navami?

Stones were hurled at a Ram Navami procession in Madhya Pradesh’s Khargone on Sunday, triggering incidents of arson, wherein vehicles were set on fire. The incident prompted authorities to clamp curfew in three affected areas and impose section 144 in the entire city. Police fired tear gas shells to disperse miscreants.

Khargone Superintendent of Police, Sidharth Choudhary, was shot in the leg and two police personnel were injured in the violence.

As many as 77 people have been arrested so far. CM Shivraj Singh Chouhan has said the rioters won't be spared and will be made to pay for vandalising public as well as private property.