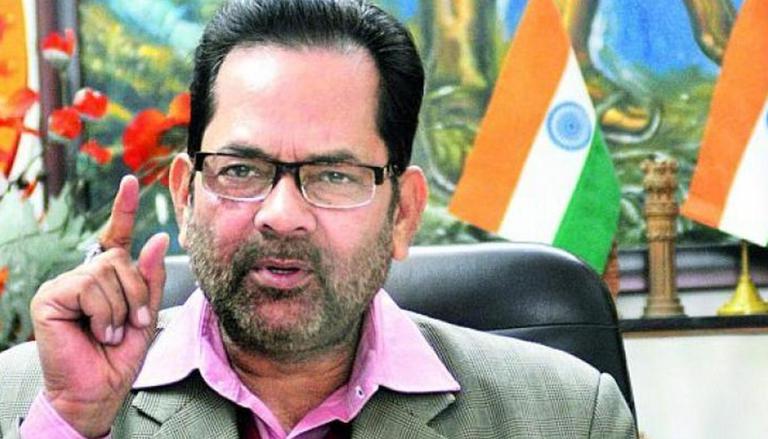 
Deputy Leader of the House in Rajya Sabha and Union Minister of Minority Affairs Mukhtar Abbas Naqvi on Thursday said that the Trinamool Congress (TMC) MPs are trying to repeat Bengal violence in the Parliament. Naqvi, while referring to the incident where TMC MP Arpita Ghosh broke the glass pane of a wooden door of the Rajya Sabha, said that it was a case to take serious action on. Earlier on Wednesday, six TMC MPs were suspended following the ruckus they caused in the House.

Naqvi while speaking to ANI on the suspension of TMC MPs from Rajya Sabha said they are continuing their ‘legacy of violence’. "They (TMC MPs) are conspiring to tarnish Parliament with their legacy of violence. They resorted to vandalism. They're trying to repeat Bengal violence in Parliament. This is a fit case to end membership of such MPs," the minister said. The Opposition including the TMC MPs has been disrupting the monsoon session proceedings of the Parliament over the Pegasus row.

Meanwhile, BJP slammed the Opposition on Thursday over the ruckus during the Parliamentary session. BJP’s Ravi Shankar Prasad while addressing the ruckus, said that the Congress party carries an agenda to disrupt important discussions in the Parliament. Prasad went on to state that India is a democratic country whose conduct is appreciated across the world. The MP alleged that the Opposition lacks the ‘standards of conduct’ in the House.

On Wednesday, Vice President Venkaiah Naidu suspended six TMC MPs from the Rajya Sabha for the entire day following a ruckus in the House. The Parliamentary Bulletin published by the Rajya Sabha secretariat identified them as Dola Sen, Md. Nadimul Haque, Abir Ranjan Biswas, Shanta Chhetri, Arpita Ghosh and Mausam Noor. It stated that these members who entered the well of the Rajya Sabha displaying placards and disobeyed the Chair were asked to withdraw from the House by Naidu.

At the beginning of the day's proceedings, Jawhar Sircar took oath as an MP and Naidu agreed to take up discussion on the agitation against the farm laws. However, the latter rejected notices by TMC's Sukhendu Sekhar Roy, Mallikarjun Kharge and KC Venugopal of Congress and other members pertaining to the Pegasus 'snooping' row under Rule 267. This rule calls for setting aside the business of the day to take up discussion on the issue being raised.

During the ruckus, a Parliament Security Services (PSS) officer suffered minor injuries as Arpita Ghosh, one of the suspended TMC MPs, broke the glass pane of a wooden door using her mobile phone in a bid to forcibly enter the Upper House of Parliament. The ruckus caused by the Opposition over the 'Pegasus Project' issue continued in both the Lok Sabha and Rajya Sabha. The two Houses have been witnessing protests since the start of the Monsoon Session on July 19.