Cracking down on BJP's 'Jan Ashirwad' yatra, Mumbai police has filed 36 FIRs as of Saturday, for violating COVID-19 protocols. MVA has blamed BJP for 3rd wave 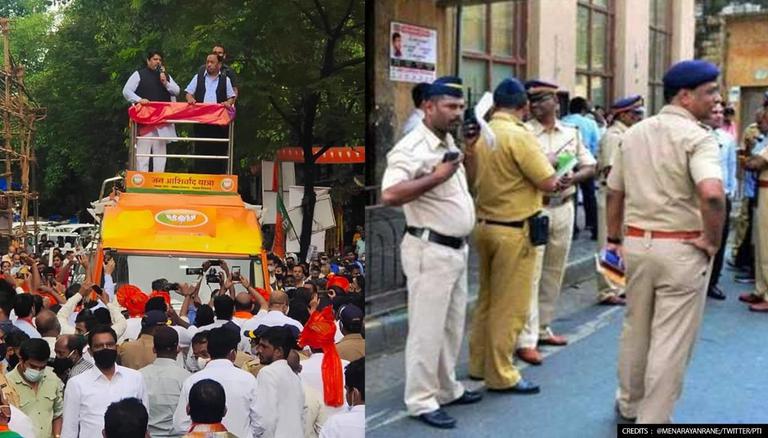 Sena-turned-BJP MP Narayan Rane along with former CM Devendra Fadnavis lashed out at the Maharashtra government for being biased in their judgement and for their failure in tackling the pandemic situation. Vowing to continue his 'yatra', he dismissed the FIRs lodged against the party organisers and activists. Seven FIRs were registered at Vile Parle, Kherwadi, Mahim, Shivaji Park, Dadar, Chembur and Govandi police stations in Mumbai against Rane's 'yatra'.

"I don't care about the FIRs, we are also seeing that many rallies have been conducted during the pandemic. But no action was taken on them. The government has failed in their management of the COVID situation," Rane said. Rane further added that the Maharashtra government was making money from medicines and he did not care about any objection from such people.

On Wednesday, Shiv Sena MP Sanjay Raut contended that the BJP's 'Jan Ashirwad Yatra' could result in the third wave of COVID-19. Speaking to the media, Raut expressed strong displeasure at the crowds gathering at the places visited by these ministers. According to him, this was a deliberate ploy by BJP to cause problems for the Maharashtra government. His comments were seconded by NCP's Nawab Malik and Congress' Ashok Chavan.

"The Jan Ashirwad Yatra is an invitation for the third wave of Coronavirus. Everyone knows this. The huge gatherings and show of strength by anyone is tantamount to inviting the third wave. The Chief Minister has given such an indication. You are deliberately doing this to ensure that the state gets into trouble," said Raut.

Prime Minister Narendra Modi on August 10 had announced that the newly-inducted 39 cabinet ministers would go for the Jan Ashirwad Yatra from August 16-17 covering 20,000 km cutting across 22 states and the remaining Union Cabinet Ministers would do on August 19-20. The yatra sought to inform people about the achievements of BJP-led central government in internal, external, economic, social and health spheres. In Maharashtra, Bhagwat Karad is touring six districts of Marathwada, Kapil Patil is visiting areas such as Panvel, Thane, Kalyan-Dombivali, Navi Mumbai and Bhiwandi. While Bharati Pawar will tour Palghar and Nashik, Rane will tour Mumbai, parts of Raigad, Ratnagiri and Sindhudurg.