Chandrababu Naidu reminded Reddy about his pre-election promise to make petrol and diesel prices in Andhra Pradesh 'the lowest' in India. 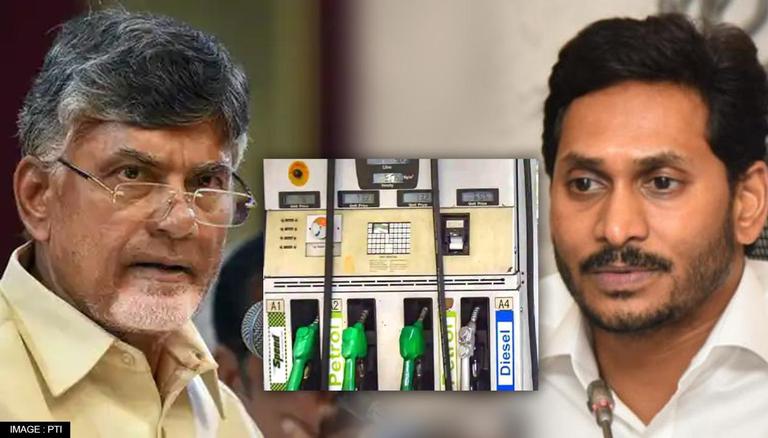 
TDP Chief N. Chandrababu Naidu lashed out at Andhra Pradesh Chief Minister Y.S. Jaganmohan Reddy on Saturday, questioning why his government was not reducing VAT on fuel like other states. Slamming his 'silence' on the matter, Chandrababu Naidu reminded CM Jaganmohan Reddy about his pre-election promise to make petrol and diesel prices in Andhra Pradesh 'the lowest' in India.

The former CM stated that government should cut rates by Rs. 16 to Rs. 17 per litre on both petrol and diesel to make Andhra's fuel prices the lowest across the country, and to fulfill YRSCP's pre-poll promise.

Notably, after the Centre brought down excise duty on petrol and diesel, 23 States/Union Territories (UT) also reduced the Value Added Tax on fuel to lessen the burden. However, there are 13 States/UTs which have not reduced VAT in Petrol and Diesel. These include Andhra Pradesh along with Maharashtra, Delhi, West Bengal, Tamil Nadu, Telangana, Kerala, Andaman and Nicobar, Jharkhand, Odisha, Chattisgarh, Punjab, and Rajasthan.

In a big relief for consumers, the Centre on Wednesday announced a significant reduction in excise duty on petrol and diesel in India. With this, the prices of petrol and diesel were reduced by Rs. 5 and Rs. 10 respectively from Thursday. While several states followed suit and announced substantial reductions in fuel prices, others, mainly opposition-ruled states, refrained from doing so.

Lashing out at them, BJP spokesperson Gaurav Bhatia questioned major Opposition parties like the Trinamool Congress (TMC), the Aam Aadmi Party (AAP) and Congress, and accused them of doing "petty politics".

"If the Centre and BJP-ruled states can give relief to people, then why not the Congress-ruled states," Bhatia asked, alleging they were "cruel and incompetent".

Earlier today, the BJP also staged a protest in different states where fuel prices had not been brought down by respective governments.

Protests were held by the BJP in Jharkhand's Ranchi outside the DC residential office where the party handed over a memorandum demanding a reduction of fuel price. A massive protest was also held by the Delhi BJP against Chief Minister Arvind Kejriwal over the same. In Punjab, the BJP protested against the state government by burning effigies of CM Charanjit Singh Channi.